October 13, 2010
Round One:
Just great.
We've had a mouse living in our living room (bold little sucker) recently. To be honest, I was sick of him...and, okay, so I was a little grossed out too.
Without having much prior luck with mouse traps and/or deCon, I decided to go the old sticky trap route this time, as I've heard they're the only way to go.
We set out a couple of strategically placed traps, in hopes to catch the little beast in his tracks.
Let me tell you, this is a resourceful little mouse. I under estimated him.
The next morning, I woke up...to a little mouse print in the trap by the stove and a missing living room trap. I thought I had scored, called up the hubby to thank him for being so kind and loving and thoughtful for removing the poor little trapped mousey-poo and he was all..."Er...I didn't move it."
Ah...wha'?
"Nope...didn't touch it."
Yeah...nobody else coulda touched that trap...which means I had a mouse, with a sticky trap attached to it, somewhere in my home. And, my husband, being the man that he is, nonchalantly said, "Oh, it's just probably under the couch."
Grody. Ew. Uh-uh. Aw, man...really?
So, my choices: 1. Either wait for the Mr. to return home from work to be my knight in shining armor and rescue me from this retched beast.
Or.
2. Tackle it myself.
*GULP*
Here's how the story ended: I tackled it myself...found the *empty* sticky trap stuck to the bottom of the couch. Dang, little Houdini mouse. 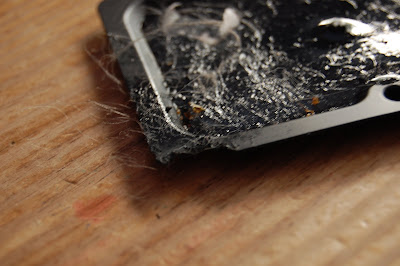 We replaced some traps, according to strategery, and waited in the bushes for the ambush. We got him...stuck to both traps AND the bottom of the couch.
SUCCESS!!
Or so we thought...
And the saga continues...
Stay tuned for "the rest of the story"...