How the Mr. Popped the Question!

Okay...so, y'all know that I was a "package deal"...a "two fer one" if you will...coming into my relationship with Mr. Wonderful.
We dated...and 6 months into our relationship...I knew for sure, that he was the one.
But...ah...well...apparently he needed a bit longer. Like a whole stinkin' year and a half longer!
(And here's where I'll tell you the story I mentioned yesterday!)

One of our favorite places to go when we were dating, was Duluth. The atmosphere, the views, the fun stuff to do (hike, ski, walk along Superior) was just amazing...a great place to fall deeply in love! 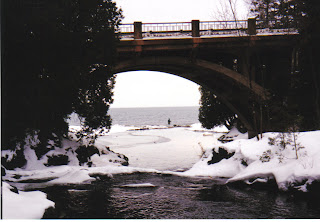 So, we decided to celebrate our "one year anniversary", Valentine's Day, and my birthday...all at once in a weekend getaway up in Duluth.
Me...being the girl, decided that I had enough of always making plans, arrangements, yadda yadda, so I told him it was his turn to find a place to stay. A few days in advance, he tells me he just found a place.
And shows me a photo of what looks like a trailer, set in snow. He was dead serious. I was mortified.

(Wow...this is getting long...time to condense...) We arrive in Duluth, and he drives me straight to this cabin in the woods. It was picturesque! He was just feedin' me a line with that trailer business! 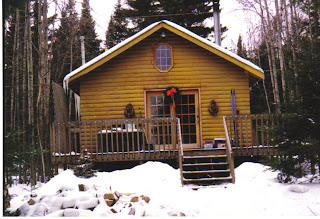 So, we're exchanging gifts, and he tells me to go throw more wood in the fire...and what sits atop the wood pile?
A pretty little velvet box (squeeeee!!)...I get all excited...open it...and find...
A necklace.
Which I had specifically mentioned I didn't need another of. (Aside by me...it is a beautiful necklace...and I totally appreciate it now!!)
Now...the engagement story (since that long novel above, was an "un" engagement story!!)
Fast forward almost two more years from the story above and I was getting impatient. I mean, for pete's sake! I was at the ripe old age of 23, in a relationship with a totally awesome dude that loved me and my son and treated us wonderfully.
Only...he seemed in no hurry to "make things official". So, me being the impatient gal that I am told him it's time to "sh#@ or get off the pot"...I wasn't gettin' any younger, and if he didn't love me and want to marry me, then life needed to move on.
I gave him an ultimatum. "Make a decision by November 1st." (Originally it was October 31st, he immediately asked for one extra day...just to be a turd...I obliged.)
Well...November 1st came. I worked that day...and I remember walking out to the parking ramp with a co-worker telling her, "I dunno what I'm gonna do! I love him! I don't want to break up with him!!"
It was a weekend when my son went to his dad's, so I saw him off, and lay down on the couch to wait for my man to get off work...so we could "have our talk".
Let me digress...I got a phone call from him earlier in the day...on my way home from work, he told me he "had a little accident with his four wheeler (he works with farmers and spends a lot of his time on a four wheeler), and hurt his hand" and wondered if I'd look at it.
So, anywho...back to the couch. I had fallen asleep. The next thing I knew...my hottie was coming down the stairs...nerves set in...I wondered if I was gonna hafta stick to my word and dump the sorry louse...or if he would remain my Knight in Shining Armor and decide that, indeed, I was worth holding onto.
So, he sits down next to me...his hand is all bandaged up...and the nurse in me rears her ugly head..."ohmigosh!! Are you okay? What happened...lemme look at this!"...and I begin to unbandage his hand.
Well, I'm unwrapping and unwrapping this bloody bandage and suddenly he closes his hand and drops down on one knee...shaking, he pulls out a ring and says, "Will you marry me?"
And then I fainted.
And then I picked myself back up...smoothed down my hair...and began laughing and kissing and saying yes and laughing and kissing and saying yes and wow. (Oh, and btw...the "blood" on the bandage? He had thawed hamburger, to make it look like an authentic injury with blood and all!!)
Elation.
We drove over to my parents...told them the news (they already knew...my Mr. had asked my dad for my hand in marriage...awww!), and then we went to supper...me with my fist in a firm death grip, as the ring was too big!! (But, dang if I was takin' it off!)
Mr. Wonderful had made reservations at the restaurant where we had our first date.
When we arrived, our table had a beautiful display of a dozen red roses...and a card that read, "I can't wait to spend the rest of my life with you." 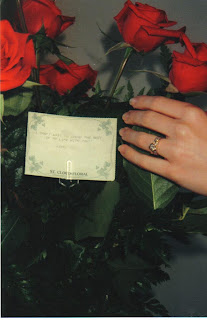 Have I ever mentioned how much I love this guy?
And, just so y'all know...Mr. Wonderful has admitted that he is thankful for that ultimatum. He says it helped kick his butt into gear and realize that he's got one fine, amazing, delightful, enjoyable, funny, cute, awesome woman.
Okay, so I embellished. He did say it helped kick his butt into gear...but I threw in that other stuff about me.
And, now...your turn!