My Grandpa and the Pot Plant 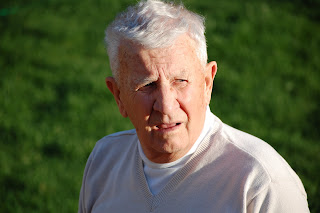 He looks kinda grumpy here, but really he's not! This man will do anything for a loved one...he'd drive through three states just to change a tire for you (and bitch about it the whole way, but be darned mad if you called anyone else!!), he even once brought me my purse when I was shopping 45 minutes away...just 'cuz I was air-brained enough to leave it at home! He doesn't drink, doesn't smoke, is nearly 80 years old and is healthier than most 40 year olds. That's Grandpa!

So, anywho, Good Ol' Gramps has this eclectic friend, whom we'll call Crazy Z. Well, Crazy Z knows everything about everything and doesn't hesitate to share his knowledge (drives my grandma crazy! "Z says we should do this!" or "Z says hemorrhoids are caused from a hangnail" or "Z says when the wind is blowing from the NW...blah, blah, blah", ah, you get the picture), oh, so where were we? Oh, yeah...Crazy Z knows everything!

I was at Gram and Gramps house the other day with all the kiddos when I spied a suspicious looking plant in cup outside their home. I said, "What's that?"

Me: "Huh, 'cuz it looks like a marijuana plant to me."

She: "No, I think that has three leaves."

Me: "No, that's poison ivy. I'm pretty sure marijuana has five leaves and looks, well, exactly like that."

(much inspection by the grandfolks ensued, I loaded my gaggle of children in the van and forgot about the suspicious greens in my grandparents possession, until...)

Gram: whispering "Hi, it's me, I destroyed it."

So, yes, my grandfather was in possession of an illegal drug...apparently Z is the Drug Lord for octogenarians! Oh, I can just hear it: