October 31, 2009
It's Halloween!!
My kiddos woke up this morning and asked..."Can we go trick-or-treating now?"
Um...no.
But tonight, I will be spending plenty of time in the company of two superheros, a Hollywood starlet, a fairy...and one handsome man. Photos to follow...perhaps tomorrow?
And lemme just tell ya, my friends...I don't know what the weather's like where you are...but it's a bit nippy here. Okay, it's down right cold...and it really puts a damper on the costume when hats and mittens and parkas and snowsuits are required.
I don't know about you, but I don't remember Batman wearing snow boots and a Lightning McQueen hat.
---------------------------------------
In other news...I made The Pioneer Woman's Chicken Parmigiana last night...and won over my household. 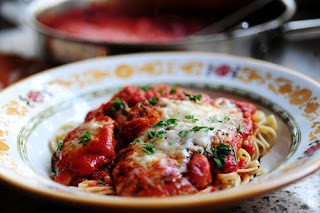 And myself.
Yes, you read that right...I won myself over. (That photo is her photo, not mine...mine didn't look nearly as pretty as that...and our dinnerwear not nearly as hip...we suffer eating off of the poor man's Corelle...)
It was so good, I had it for breakfast this morning...and I'll probably have it for lunch too, and, heck...maybe even supper.
No, scratch that...I'll probably have a nice supper of Laffy Taffy, Snickers, Nerds, and Now-n-Laters.
The Snickers, only 'cuz it's got peanuts, and I figure I'll need a little protein to get me through.
Have a safe and happy Halloween my friends!!