July 07, 2010
This spring...my hubby and I planted many seeds and seedlings in the God-forsaken sand pit we call, "our garden".
We had big dreams of fat orange pumpkins, crisp watermelons, and a crap load of cucumbers to pickle. Or something. (I've never pickled anything...so that was a stretch of our imaginations.)
Last year we had what we deemed a "successful" garden. By our standards, anyway, so, with a successful garden under our belts, we got cocky thinking that this year would be even better.
It's not.
Friends, meet my garden: 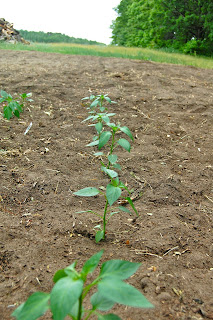 This is my garden on weed(s): 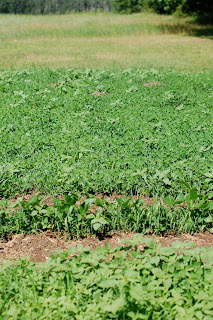 Any questions?
Geepers...between the pocket gophers, the dog trying her darndest to catch said pocket gophers, and the cut worms...we're left with a whole bunch of weeds that my husband can name 'cuz he's an agronomist and kills stuff like that for a living.
Oh...and our peppers and tomatoes survived.
We did something this weekend that some of you may scoff and guffaw and shake your heads at.
We replanted.
It's true. It's July...and we replanted.
But now? Now I've got cucumber and squash and watermelon plants all over (and a crap load of dying weeds...)...and the cut worms should be dead and gone.
That pesky gopher is still there tho.
Not quite sure what to do about him...'cuz I guess my ferocious beast of a dog can't figure out how to get him...but he sure likes digging up my garden trying to find him! 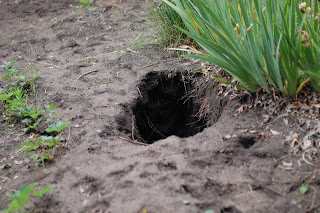