August 31, 2009
So, when I posted this photo before, some of you asked to "hear the story"...well, I'd tell ya, but I'd hafta kill ya...well, okay, it's just that, well...there's not much of a story (believe it or not!) behind the wedding dresses, that is. But, I do have a little ghost story, that I can share...with no bodily harm to you.

But first, the "story" behind the wedding dresses...

So, when we went on our "un-family reunion", we stayed in a place (that used to house a bunch of nuns and a monsignor) that was owned by five women. When five women collaboratively own, well, anything, the outcome is bound to be fantastic! Not a detail overlooked, these women thought enough to supply some wedding dresses, for children and, ahem, apparently men, to try on and have fun with!

And have fun, we did!! I'm just bummed that the pic with Mr. Wonderful in a dress is on someone else's camera...I've got an email in to my aunt, in whose camera said photo resides, we'll see if I can get it! 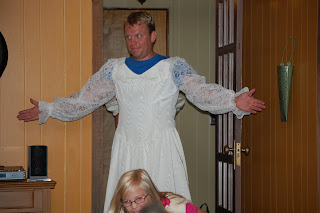 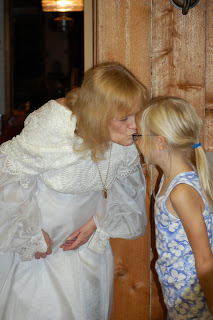 So, while the wedding dress story is quite, well...anticlimactic, I do have a fun ghost story to share with you. You know, if you believe that sorta thing, which I'm not sure that I do...but...

So, this place we stayed, turns out the monsignor died at the kitchen table. My grandparents were the first to arrive, and Gram needed to take a nap. She set her eye glasses and a glass of water on the nightstand next to her. They (gram and gramp) got the only room with air-conditioning and it's own bathroom...certainly fit for a monsignor, no?

Well, after her nap, she was confused to be unable to find her glasses and water. She, my grandpa and my cousin searched the room high and low...nothin'. No glasses, no water anywhere in that room. Then...they found them...(insert creaky doors, spooky music and witchy cackles here) in a room where grandma had never been!!

But, that's not all! The next night, I came in from outside...to find my sweet grandma resting her weary head on the couch. She tells us, she went to bed, was laying there when the bed moved a couple times...like the mattress bounced a bit. She didn't believe it the first time...then it happened again! She couldn't take it anymore, so she decided to get up and wait for grandpa to come to bed.

Well, we girls who were left up talking, laughing, having a couple of drinks...we had a heyday with this!!

"Yeah, such a pretty lady she is...he picks her to give his attention to!"

And so on and so forth...giggling, joking, carrying on. And then...the lights flicker!!! Spooky!! Only thing is, you scare a group of women, and it just gets worse!!

"Wait!! This monsignor? We've got it all wrong!!" speculates somebody (I'm not sure who, too much talking going on!!).

"He's a Catholic priest or something, right? He's just keeping his vows!! So, first gram sleeps in his room...he moves her glasses and water, a gentle 'Get out of my room, please' from him. Then, poor guy, grandma probably crawled right into bed with him! He was probably trying to discreetly inch his way out of the bed, and the bed moved a bit! He was probably thinkin' 'Geez, this woman won't leave me alone!!'...!!"

Oh, it was fun! Lot's of shrieking, scared, goofy women...speculating about the monsignor and gram!!

I sure love a good ghost story!