August 18, 2010
Here it is! The post I promised you about traveling with young children!
After spending over an entire day's worth of time in a vehicle with our 5 kids, I feel like I have some pretty good advice to give you...
Stay home.
I kid. I kid!!!
I would not trade our memories in the Black Hills for anything. I'll take the barf and the fights and the whining and the messes any day. Well...okay...maybe not "anyday"...but most days!
Here's what I learned:
1. Quarters: Sarah gave me the idea to give each of my kiddos who understand money, a roll of quarters. Then, for every "breakage of rules" that happened, the offender would have to give us a quarter. My mom suggested upping the ante a bit, and making the offender give a quarter to one of his or her siblings, particularly when they were fighting. THIS worked wonders. I think each of our kiddos only had a couple of quarters taken away from them...and they got to spend their remaining money on a souvenir!
2. momsminivan.com: Eastlyn and Co. directed me to momsminivan, and it was love at first sight! I printed off (and laminated) a bunch of her travel games...BINGO was by far the biggest hit, in fact, our kids really only played BINGO and didn't even break into the other games! 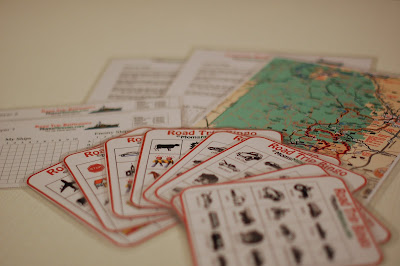 3. Prizes: I went to Target and stocked up on their dollar crap, I mean treasures, and man alive!! My kiddos wiggled with excitement when they found out that there would be prizes on the trip!
4. Drugs: I hereby resolve to never ever tell you to drug your children up again. After this post, that is. Here's the deal...it took us 3 hours to get an hour away from our home. We started having car sick kids...and our kids don't really get carsick. Here and there, yes...but not typically. We finally stopped at a gas station, and made everyone (except the baby) take Dramamine. Bonus of Dramamine: It's sedating. Our kids fell sound asleep for an hour or so...or at least until we reached the road that is now know as the "Bumpiest Road We've Ever Been On". It was actually comical...looking back and seeing our sleeping children bouncing up and down like little rag dolls. Then they woke up...and the comedy was over.
5. Journals/color crayons: For our two middle kids, I bought notebooks. Belle really got into it, and began to journal the vacation...E.W just wrote letters and colored in it...but it kept them both busy!
6. Er...cups?: It might be a good idea to keep an empty cup or two on hand. You may burn me at the stake for even suggesting this, but with our 5 kids, the "I've gotta go pee!!!!" proclamations got to be one too many. So, I had Hambone pee in a cup...and it worked wonders!
7. Pray: Pray for you sanity. Pray for your safety. Pray for the health and well-being of your children after about hour 6...'cuz it's at this point, that you may feel like tossing one of them out the window, or trading them at the next gas station for a tank of gas.
And last, but not least...
8. ENJOY!
And those...are my tips for now! If I think of anything else, I'll add it to the list!