August 16, 2010
I'm fairly certain, that I've established that our Baby Girl, is quite the handful. Stubborn, strong willed, spunky, and, strangely mature for her age. 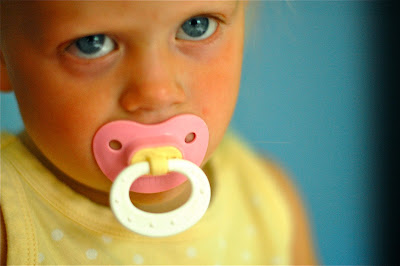 If you can refer to a two year old who throws temper tantrums "mature".
Where my older children had to be forced to start wiping their butts...she insists to "do it myself". I honestly don't recall my older kiddos pulling the "do it myself" card with me.
Ever.
With her? It's daily. Into the car seat..."I do it myself"...out of the carseat..."I do it myself"...into the high chair..."I do it myself"...etc. You get the picture.
Well, just last week we were getting into the car after getting groceries, I had unlocked the doors, and, as is my habit, I thought I plopped them on the passenger seat. While my "do it myselfer" was "doing it herself" (i.e. climbing into her carseat), I was loading groceries into the back.
I buckled her in, went around to the drivers seat...and reached over for my keys...no keys. So, I checked my purse...no keys. I checked and checked and checked my purse...asking my kids "Have you seen the keys?".
After a couple minutes of this...my baby pipes up, "Dey're right der!" Pointing toward the front of the car. I followed her gaze...right. to. the. ignition.
And, there were my keys. Perfectly placed in the ignition.
It was at this point that I called out "LORD HELP ME, JESUS!!"...and I and my kids burst out into giggles. Especially after seeing the impish pride on my baby's face. The sparkle in her eye.
For real. WHAT am I going to do with this kid?
Note to self: Do not leave keys on seat ANYMORE!