August 30, 2010
So as not to cause you undue worry and concern, I'm giving you an update on my concussion boy.
Oh, wait...you had no idea of the concussion saga? Well then, apparently you need to follow me on Twitter. ;)
It's kind of a long story...so I'll try not to be too wordy.
Ahem...here goes:
Friday night, my boy complains of a headache. Saturday morning he wakes up early (and by early I mean, I wasn't awake when he left at the God awful hour of 6 am...I mean who invented 6 am anyway?! I hear by call to abolish 6am...any 'yays'?) and leaves to go to a football game. 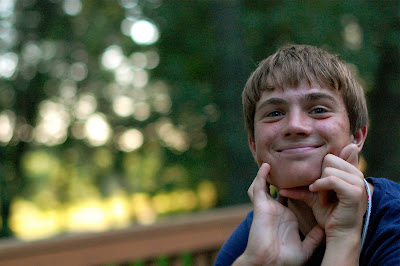 I pick him up from said football game when the bus delivered him to the high school at 3 pm. He was quiet, droopy, and smelly. Not talkative, at all, but that's not overly unusual for him.
We drop off his friend, and The Pal tells me he feels wonky and that he took a "helmet to helmet" hit at the game. Being he looks so punk, I feel his forehead and lo and behold...he's warm! We get home and take his temp, which is 101.0. Yup, 101.0 on the nuts.
I chalk up his wonkiness to being ill, pass off the word to his dad, and he leaves to his dad's for the weekend...with this text coming in from his dad: "If he pukes, I'm bringing him in."
Yes. Amen. Uh huh. I agree. Puke = head injury = not good = bring him in. I am very glad that his dad is not afraid to take him to the doctor...it gives me a sense of relief.
The weekend passes, I text The Pal here and there checking in on his status (whoa, this is getting wordy, in'it? Hang in there...I'm getting to the update....) and I always get an "okay" when I ask him how he's feeling.
Today rolls around, and in the midst of banging, pounding, barking, sneezing, mouse trap setting, I get a phone call from The Pal's dad and he tells me that he (Pal) is still dizzy. Oh great balls of fire.
I call the clinic and am told "He should be evaluated" (seriously, do they ever say anything other than that anyway?), I call the coach and am told, "He should be evaluated"...so I bring him in to have him "evaluated".
What I thought would be a 15 minute appointment, rapidly turned into 2 hours. All the while, my poor mother had my other 4 unruly children at the mall. Poor thing. Lab tests ensued...blood count = inconclusive, strep test = negative...which means the "easy answers" were out, which means we needed to irradiate my boy.
One negative CT scan later and I'm told, "Yup. We've got to consider him as having a concussion." Because of his "injury" and his symptoms, they've gotta be safe.
So, while my mommy gut is still telling me that this is all related to an illness (why ELSE would he run a fever?), we're operating on concussion mode...which means NO football until he is headache free for one week and he needs a follow up appointment in one week.
Guess I shouldn't have worried about how we were going to meet our Med Flex amount.
Dear God,
It's me, Mama.
Could you please replace the apples on our trees with $100 bills? I'd greatly appreciate it. Oh, and while I have you...could you see about getting rid of this dadgum pollen in the air?
I promise I'll pray the rosary every night for the rest of my life.
Over and out.
Amen.