In the Kitchen with Gram...Puff Pancakes!


And it's so simple!


When Gram mentioned doing "Puff Pancakes", I imagined a huge, pillow-like pancake coming out of the oven...not a cute little bowl shaped bit of deliciousness!


Gram and I decided to keep this week an "easy" week, as she's due for plasmaphoresis (a treatment that helps her Myasthenia Gravis) and usually she's pretty plum tuckered out at this point.


Few ingredients needed...a bit of mixing...a short time in the oven and VOILA! A gorgeous lunch for us. Or you. You know, whatever works. ;) (For the record, Gram's recipe is for 2 servings...I'm giving you the doubled recipe, just the opposite of last week!) 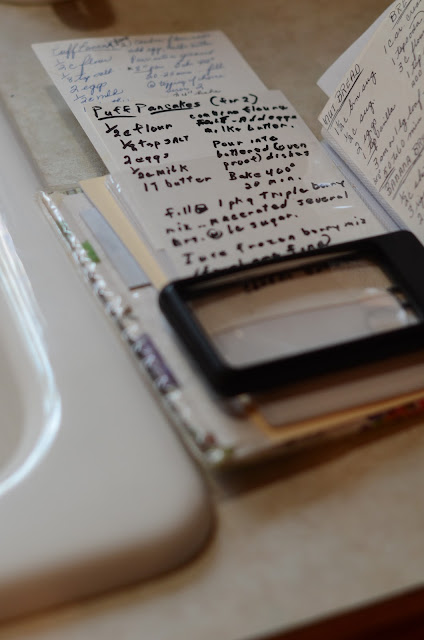 The night before (or a few hours before) you're gonna make your Puff Pancakes, you need to macerate some berries. (That sounds so naughty.) Add 1/2-1 cup of sugar to your frozen berries and let 'em macerate. They'll get nice and juicy and do delicious things to your pancakes...just watch and see. 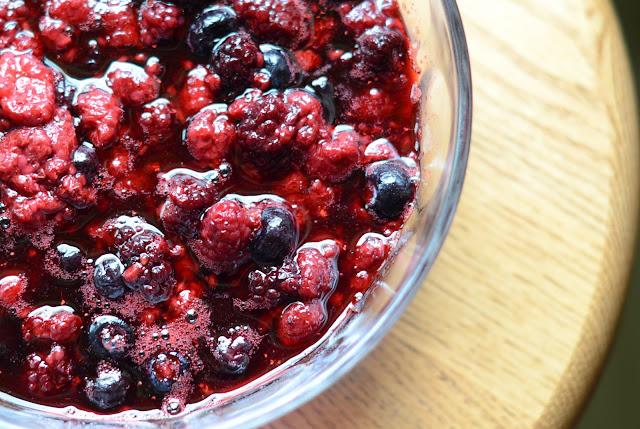 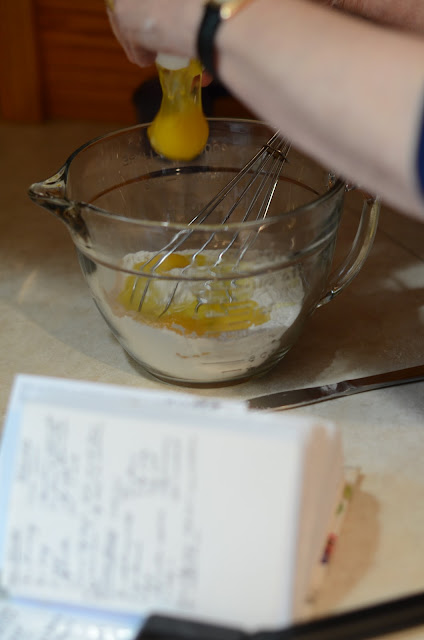 Whisk those ingredients together, then pour in the milk and whisk until it's all combined. (Note from Gram: "If you'd like to use this as more of a dessert dish than a meal, add a bit of sugar to the batter.") 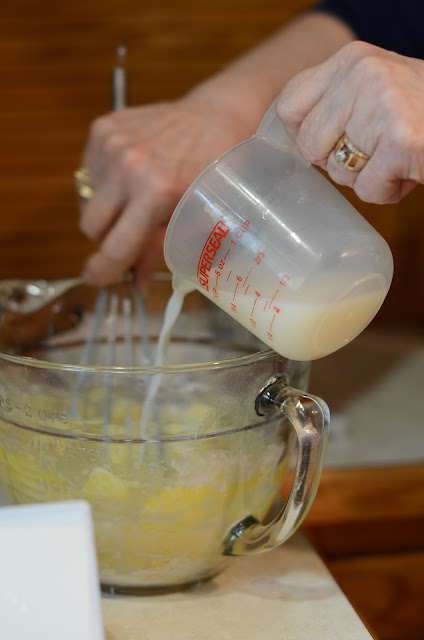 Grease 4 bowls...these are Fiestaware cereal bowls. (A good food blogger's photos of Fiestaware cereal bowls would be much more flattering to the bowls. I, however, am a work in progress which means, unfortunately, that YOU, are stuck with photos that look like the following. I apologize. And, I think it's time for Mama to invest in a flash. Carrying on...) 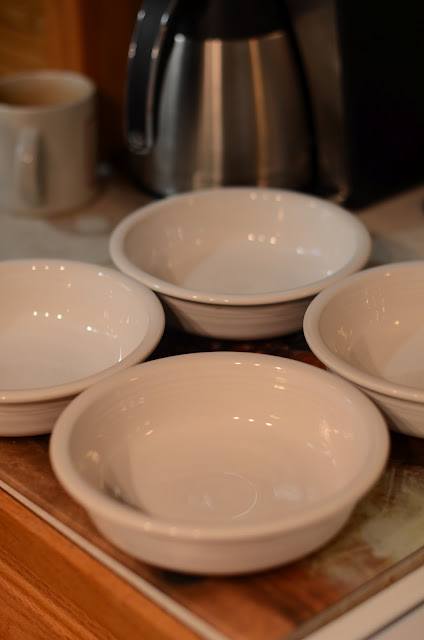 Start with 1/2 cup batter per bowl, topping off each bowl if there is leftover batter. (You can sort of see the little butter chunks in this photo...especially in the upper left bowl. Those chunks? Little bits of heaven.) 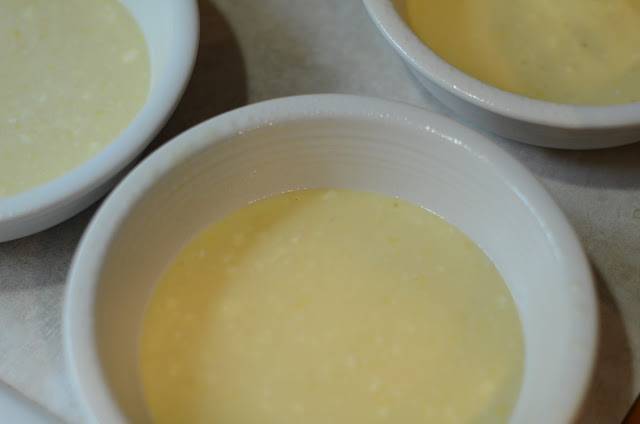 Ah HA! There they are! Little bits of heaven, waiting to melt into deliciousness in your puff pancake. Dreamy, isn't it? 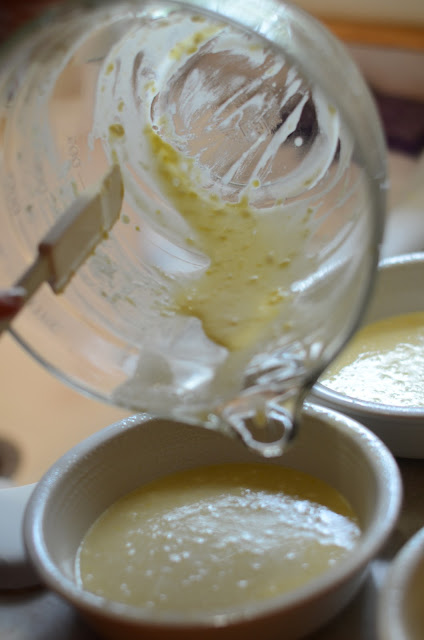 Now, put your greased, filled, not at all yellowy but more of a nice pretty white but unfortunately the photographer stinks, bowls into your pre-heated 400* oven. And wait. And watch. And salivate while your pancakes begin to do this: 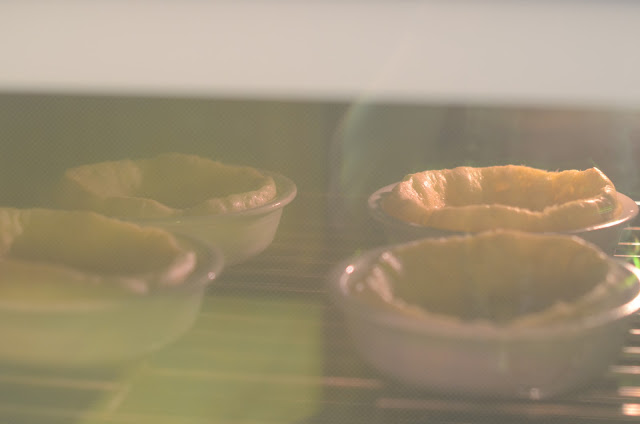 Uh uh uh!! Don't watch and salivate too long, for you have a job to do! Time to make your creme fraiche (and bugger me if I don't know how to put those cute little accents above creme and fraiche).

That's it. Done and done. Yum. 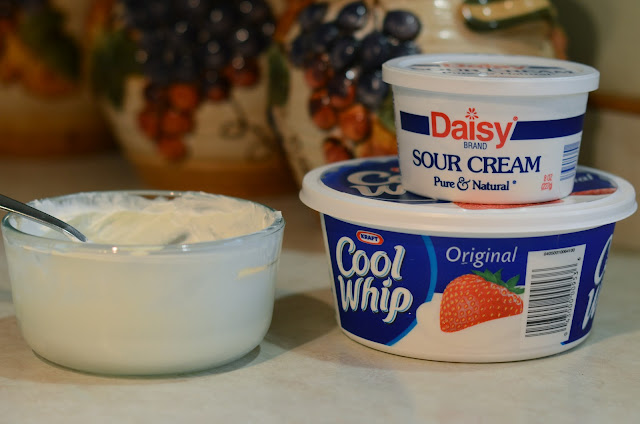 When your pancakes are done, they'll look like this: 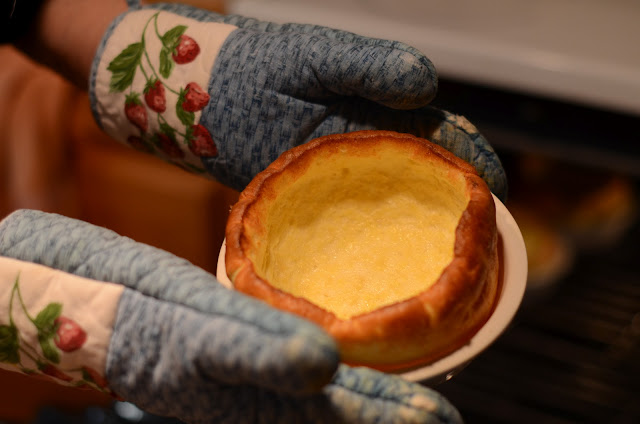 Seeing them look like this will remind you of Pannekoeken. (How's that for a little "If You Give a Mouse a Muffin"?)


Ever been to Pannekoeken? Yeah, me neither. But I hear that when you order a "Pannekoeken" (which is a big, fluffy pancake), the server runs through the restaurant hollering "PANNEKOEKEN!!!!!!" to get you your Pannekoeken before it falls. I imagine it's similar to this one...except we didn't yell.


But, we did move fast to get photos, 'cuz those puppies sure started to collapse! See how high it is in the photo straight from the oven? Now look below...same pancake...a couple minutes later, after they were filled with (macerated) berries and topped with creme fraiche. 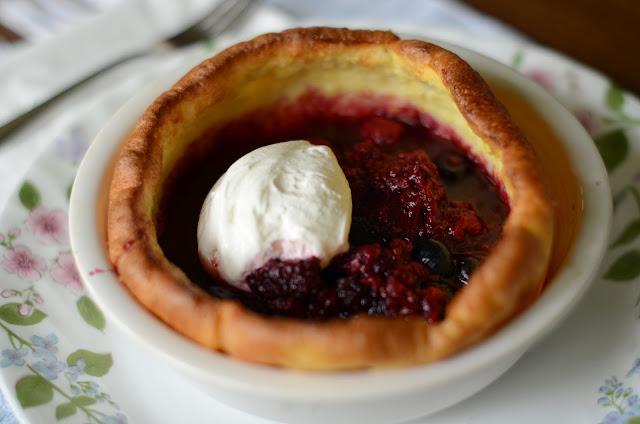 Take another look at that pancake above...see the juice from your (say it with me "macerated") berries? It's seeping into and up the bottom and sides of your puff pancake. That, my friends, is pure, sweet, unadulterated deliciousness. 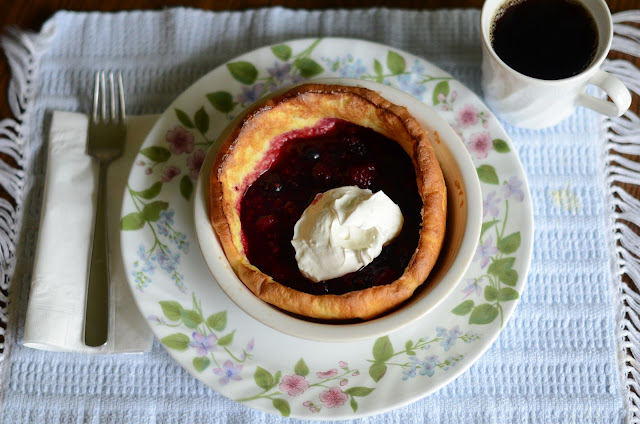 Finally, and this is most important...snap a photo of your wonderful grandparents sitting with your baby who suddenly decided to bolt under the table. Little stinker. 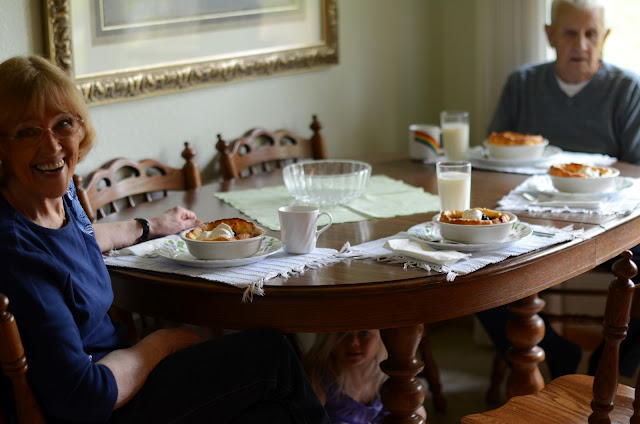 Everyone say "Hi, Grandpa!!" (And "Hi, Grandma!" only her picture didn't turn out. Something about an amateur photographer?) 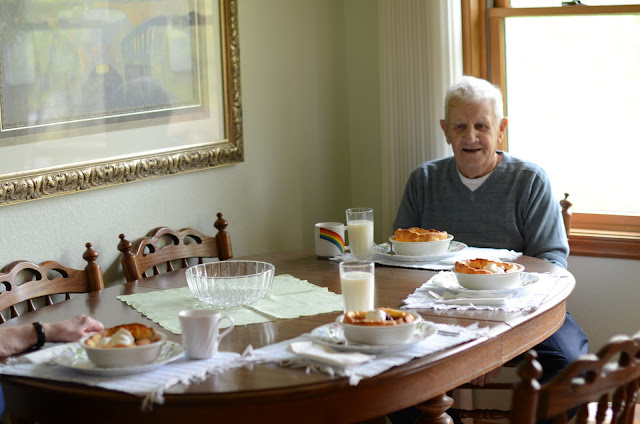 Here's how YOU can enjoy your very own Puff Pancakes!

Creme Fraiche (Gram's way):
Equal parts Cool Whip and sour creme...start with 1/2 c. of each.
Stir together until combined. Put a large dollop atop berries in pancakes.

Serve immediately and enjoy! Add a side of breakfast sausage for a complete meal!