In the Kitchen with Gram...Potato Salad and Ham!


If there is one dish my Gram is especially famous for, it's her potato salad...in fact, my uncle will request it specifically when he comes to visit! And, apparently, when my big brother was a wee little lad, he sat on my grandma's counter and ate a giant hole in the middle of her bowl of potato salad.

It really is that good.

We decided to do Ham and Potato Salad before Memorial Day for anyone who needs some picnic ideas! 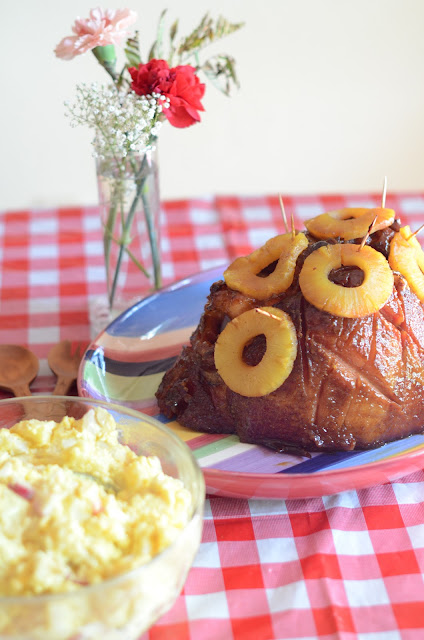 We'll cover the ham first, how does that sound?

Okay...before I go on, I've gotta say, I learned another trick about Gram's glaze. I always made mine too mustardy and it was too thin! Read on to see what I mean... 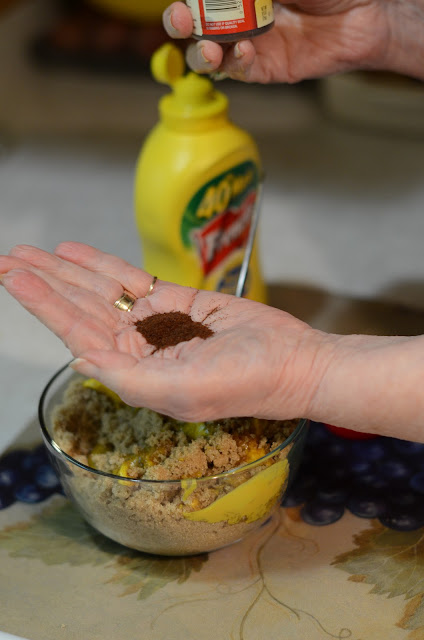 Mix together your brown sugar, cloves, and yellow mustard: 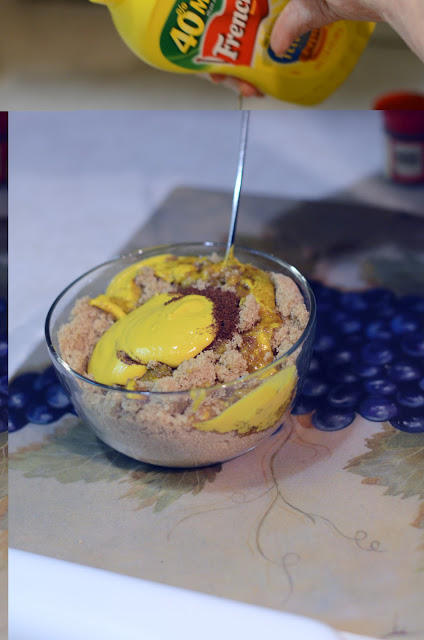 (Erm...weird. My photos uploaded all wonky. Please forgive...I can't bear to wait another 3,245 hours for them to upload.)

The trick is to get it THICK. Like a paste, not like a sauce. Much more brown sugar than I thought!

Put a dab in the roaster... 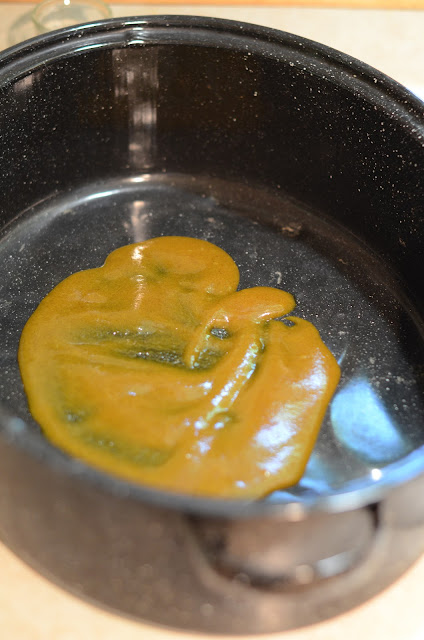 Then plop your ham on top, cut side down.

A secret about buying a ham...ask for the shank end and ask them to cut the bone out, but put it back in. Tied or untied...it just helps the glaze seep into the ham and infuse it with all kinds of deliciousness. 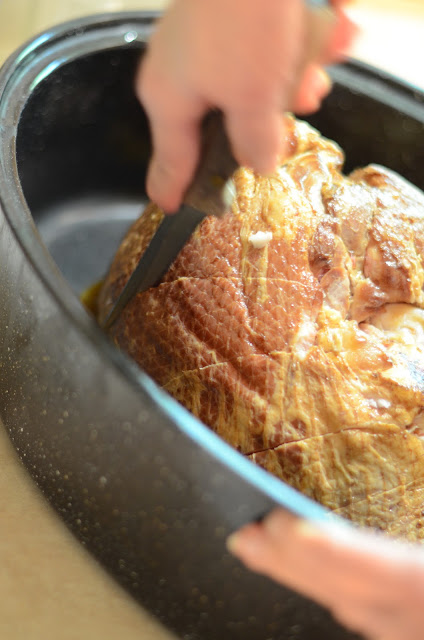 Now, score the "rind" of the ham, first in one direction (diagonalish)... 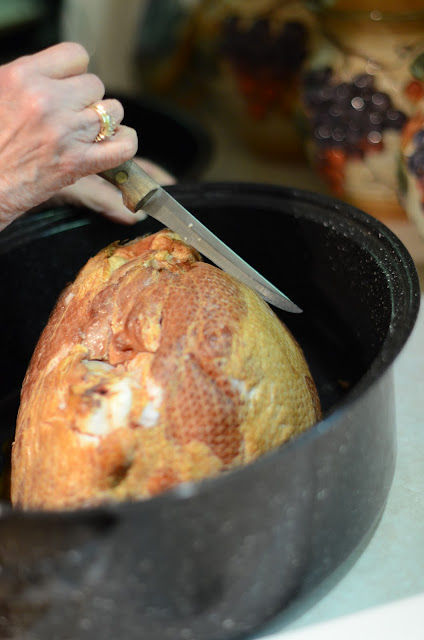 Then the other...so that you end up with a diamond pattern (so that the glaze gets into the ham and infuses it with all sorts of ridiculous deliciousness).

Pour the glaze over the top and spread it around so that the ham is all covered. (See what I mean by think? It's like a paste, doesn't want to run down the sides of the ham...) 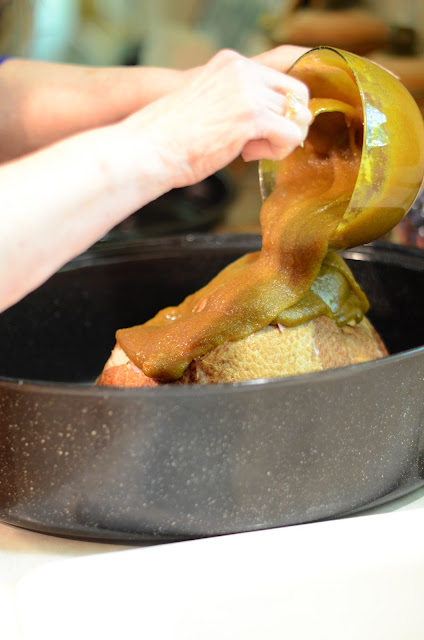 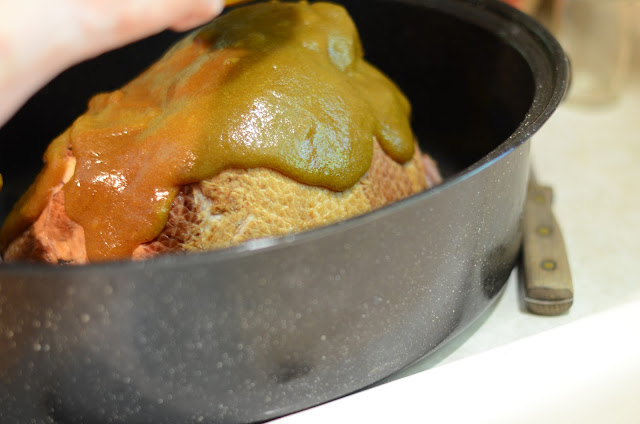 Now, toss it in the oven...or gently place, whichever you prefer...and get to work on your potato salad.

Wash your potatoes and cut them in half, then each half into quarters (judge "cuts" according to size of potato, you want the potatoes to be roughly the same size when boiling.) and place in large pot of water. 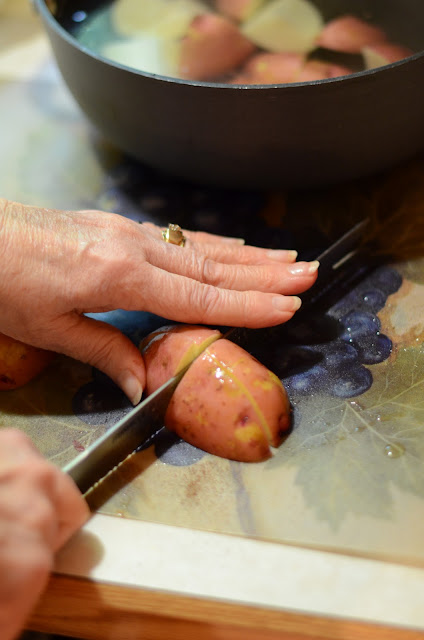 Make sure (AND THIS IS IMPORTANT SO PAY ATTENTION!!) ;) to generously salt your potatoes in the pot. Then boil them but DON'T OVERCOOK THEM!!

While the potatoes are boiling, hard boil some eggs...and (here's another Gram trick) when you're done boiling your eggs, drain out the hot water, put a cover on the pan and shake the eggs to crack the shells (Gram did this once with a bunch of eggs she was boiling to color for Easter!! Oops.) then immediately pour cold water over them to "shock" the shells right off them.

Mash up the hard boiled eggs, making sure there are no big chunks. Gram told me today that she started mashing the eggs because some people don't like yolks and some don't like whites and when you mash 'em all up? Can't tell the difference. 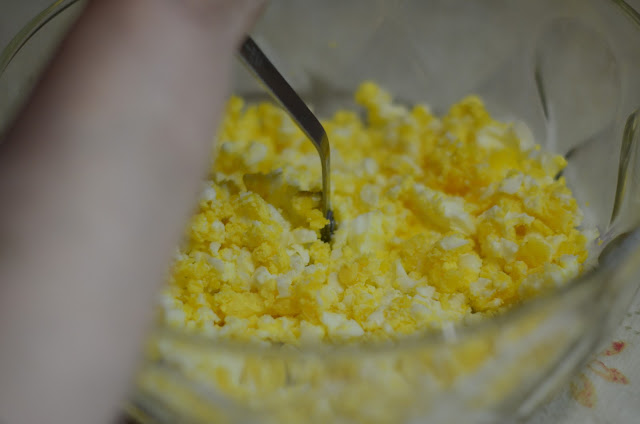 Take that yolk haters. Or, you know, white haters. Wait. That sounds so wrong. Never mind.

Now, when your potatoes are NOT TOO DONE (you don't want mushy potatoes for your potato salad, trust me) drain them, then get to peeling the skins off. If you put several on a cutting board and use a sharp knife to scrape the edge of the skin, the skin peels off quite nicely. 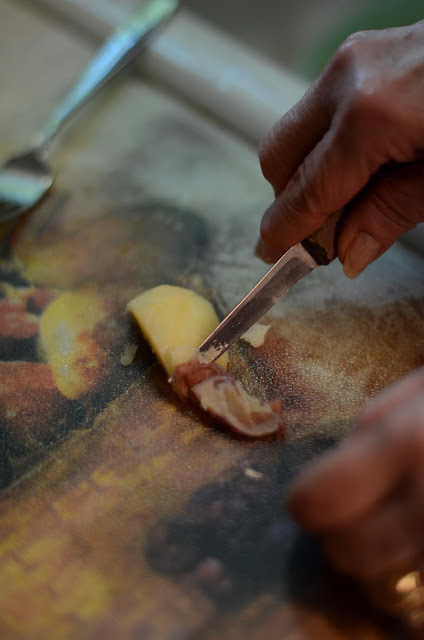 I asked Gram why she boils them with the skin on and she said the potatoes taste better that way...I believe her. They taste sooooo good!

After the skins are off, cut each potato into quarters (nice bite-sized pieces) and put into the bowl with the eggs. 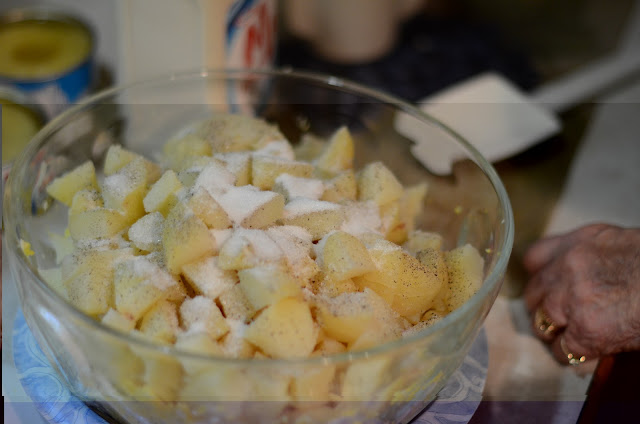 Then, squirt a bunch of mustard over the top of 'em... 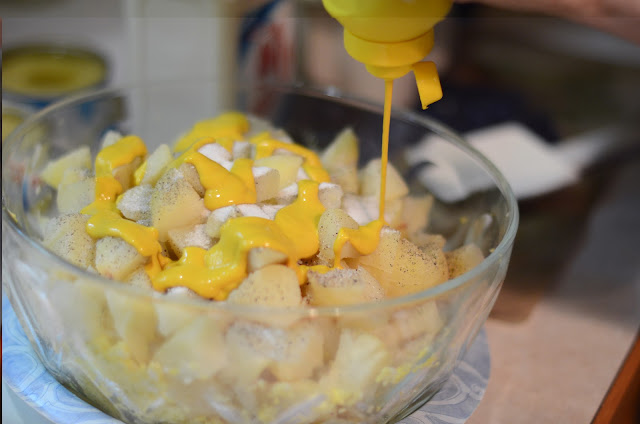 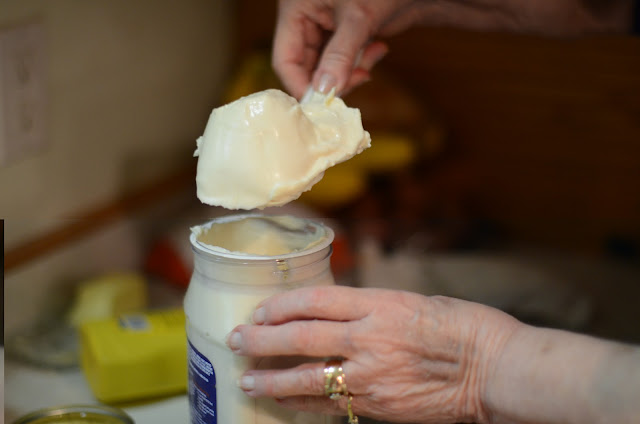 The thing with this recipe is that it involves a lot of ranges...some potatoes carry more moisture than others, so you need to judge the "wetness" of the salad as you go. This one is not supposed to be "creamy". It's a thicker salad with a nice dressing rather than all creamy and stuff. 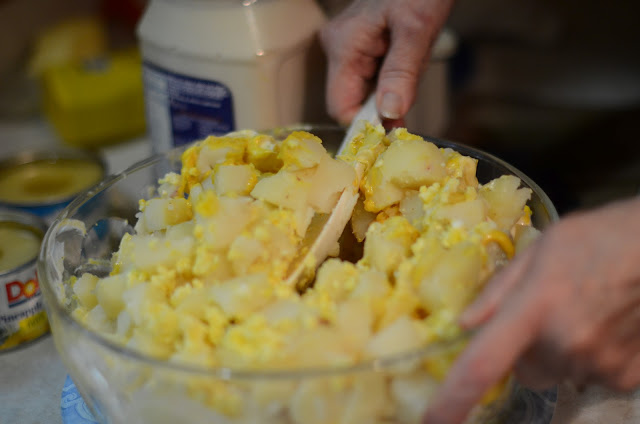 Ya hear? NOT CREAMY. (Ooops, there I go...yelling again.)

Add in the onions and radishes, it helps if you have a cute little helper to do it for you. 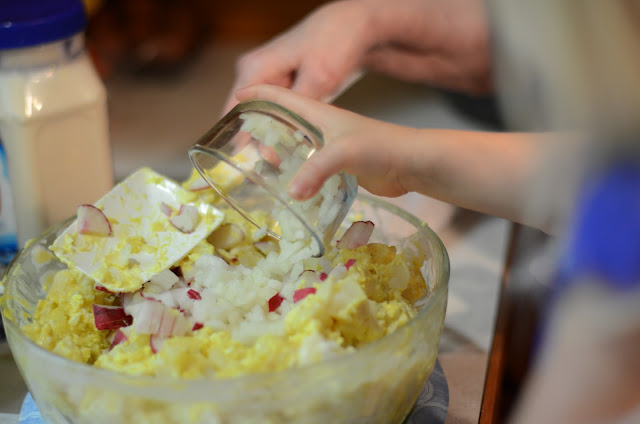 Fold it all together and VOILA. The most delicious potato salad known to man. 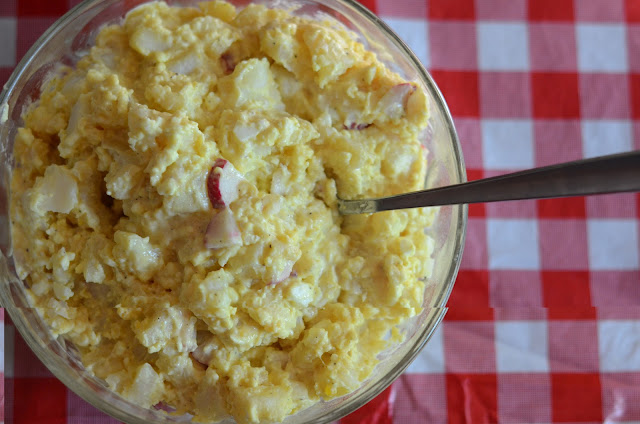 Serve 'em up, and try not to moan in pure pleasure as you dig in. Yum. 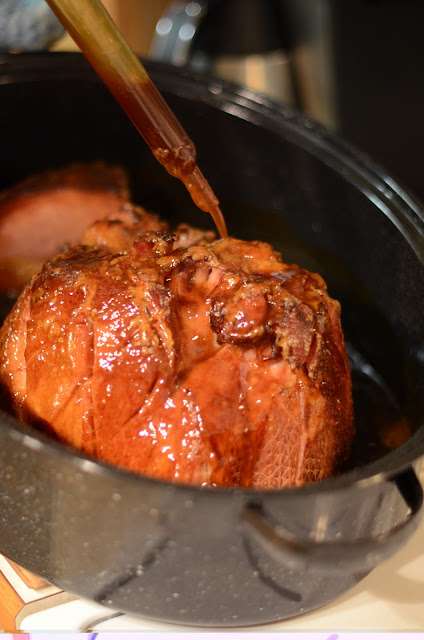 Now, back to the ham...1/2 way into cooking, baste the ham with the glaze in the pan.
With 15 minutes of cook time left, plop some pineapple rings on it. Just for looks. And purely optional. (Add whole cloves too, to the pineapple, if it floats your boat.) Baste once more, and finish cooking. 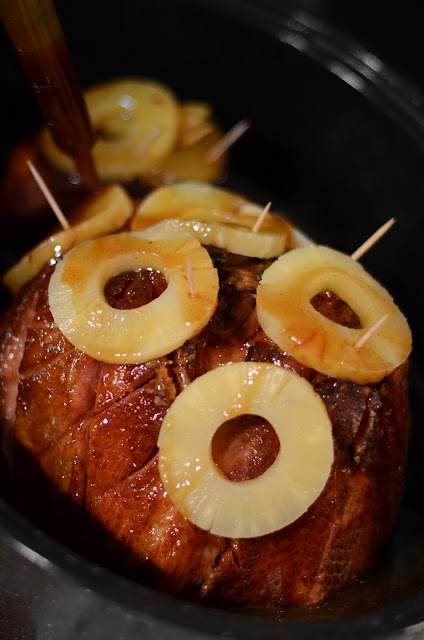 Reserve the delicious, carmalized, sryupy goodness on the bottom of the pan. You'll thank me for this later. 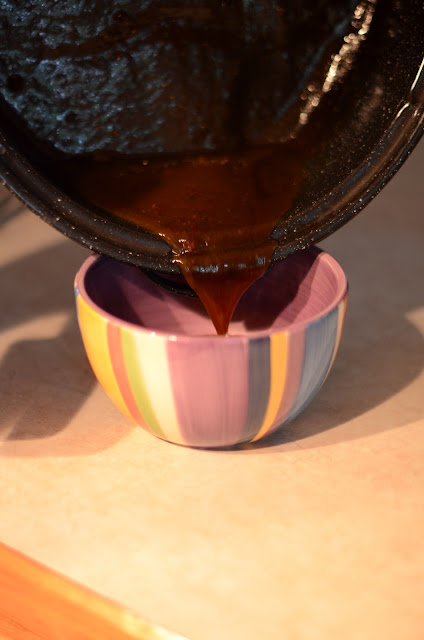 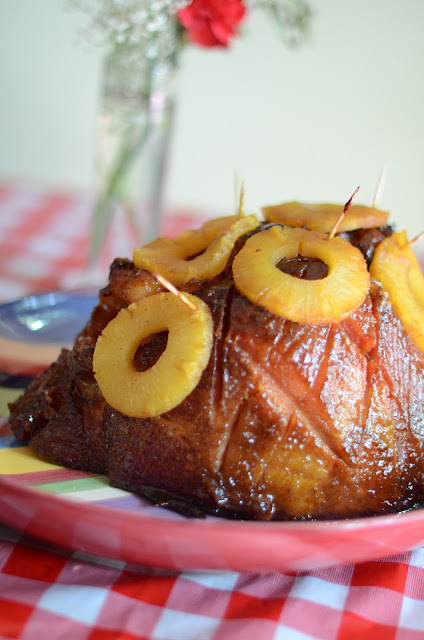 How to cut a ham, via Gram (photos to come...Blogger is being wonky.):
Cut the ham side to side, then slice across grain for a nice smooth cut.

Preheat oven to 350*F. Mix last three ingredients together. Spread a small amount in the bottom of roaster and place ham on top. Score ham skin first one direction, then back to make cross marks on it (so that the glaze gets into the ham). Coat with glaze and place in oven for 1 1/2 hours...stopping to baste ham with glaze in bottom of pan at 45 min of cooking. Optional: With 15 minutes left, use toothpicks to place pineapple rings on ham and baste...to jazz it up even more, poke whole cloves on pineapple. Return to oven to finish cooking. Reserve glaze to serve with ham because your guests will love you for it.

Wash potatoes thoroughly, then halve and quarter and boil (don't forget to generously salt the potatoes in the pot!) with skin on until just fork tender. Drain and while still hot (BE CAREFUL!!) use a sharp knife to lift off skins, then quarter each potato piece into a nice bite-sized piece. Mash eggs quite finely in large bowl. Add potatoes. Sprinkle pepper, salt, and sugar over the top of the potatoes to make sure the top layer of potatoes has been seasoned. Squirt a generous amount of mustard over the top of potatoes, then add a big "glop" of Miracle Whip..."squoosh" it around to begin to combine, add onions and radishes in, then gently fold all ingredients together, adding more mustard/Miracle Whip if it looks too dry but remember, THIS ISN'T YOUR SUPERMARKET POTATO SALAD!! It's NOT supposed to be creamy! Just "moist". Trust me on this. Amen. 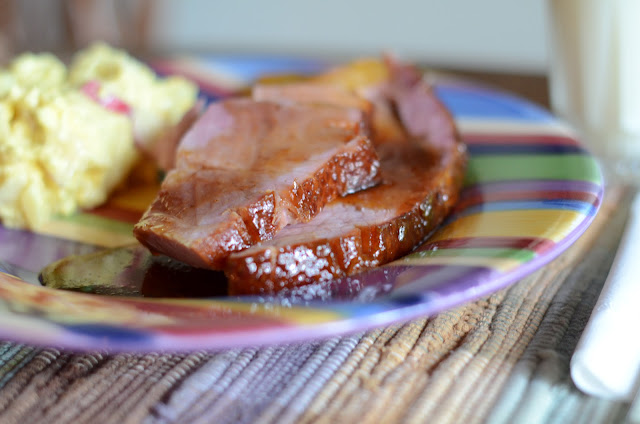