Well, we got that influenza swab, afterall...

March 24, 2011
Sigh. Where do I start?
Oh, I know...how about where I left off yesterday...
Strep, negative...I was then convinced we were dealing with influenza. Even tho she had abdominal pain. The abdominal pain was kind of a head scratcher, but I thought, "huh, must just be part of it".
By Wednesday afternoon, the lightbulb began to go on. It started out kinda dim, tho, so I kept shutting it off. At about 4 o'clock, I could no longer ignore the glaring light in front of my eyes... 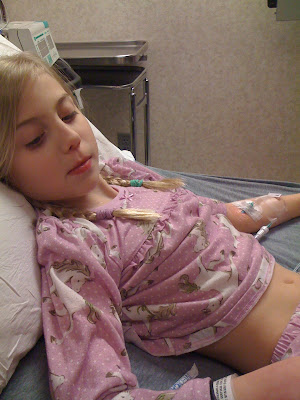 Abdominal pain that had her moaning, the way she walked hunched over, the fevers, the nausea, the lack of appetite...it was all adding up. I finally asked her, if she had to point to ONE specific spot where it hurt, where would she point. She had been generalizing her pain to the very lower part of her abdomen, but when I asked her to specify...
Her finger when right to the spot I was dreading...the right lower corner of her tummy.
*Gulp*
And, at 4 o'clock, you're hard pressed to find an appointment at the clinic. I called to talk with the clinic nurse, and together we confirmed what I had been debating...I needed to head to the ER.
I dread going to the ER...in fact, will avoid it at all costs. I really don't want to be "one of those moms" and I think the ER is for missing limbs and heart attacks.
Well, last night I learned that they're also for abdominal pain. 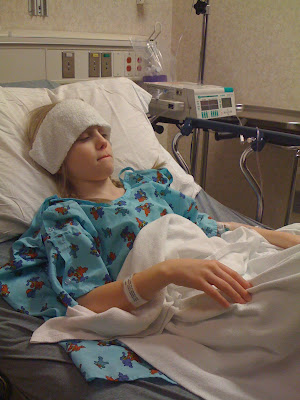 My sweet girl was unable to walk, so I lugged her from our parking spot into the hospital...we got checked in and were called back within 5 minutes, during which time, my poor babe was so uncomfortable she couldn't sit still or find a comfortable position. Her behavior confirmed that I had, indeed, made the right decision.
We were "roomed" and seen by a doctor that had my sense of humor...sarcastic. He "diagnosed" (jokingly-ish) her with "influenza, appendicitis, and a bladder infection"...'cuz she had EVERY symptom in the book! And, she bought herself an influenza swab after all...
To rule out appendicitis (or, rule in, in our case...) they needed to do a CT scan, and so, they wanted her to drink some contrast, and by "some" I mean a giant styrofoam cup full, and do the CT an hour and a half later. Well, about 1/4 of the way into the cup, she barfed it all back up.
And by "all", I mean "ALL"...plus the Tylenol she had just taken.
CT was then done via "Plan B"...contrast via her IV. We were told we'd receive results "within" the hour. 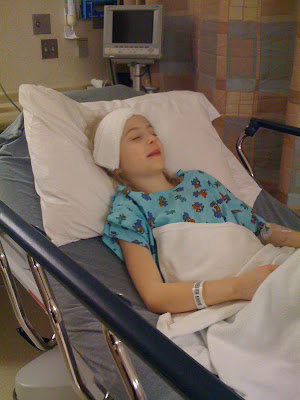 After returning to our ER room, the nurse rechecked her temp, which had been running 100-101...it was now 103.1, and our nurse said, "Hmmm...I'll betcha it's an appy."
Shortly there after, a man in a white jacket walked in, and I immediately recognized him as one of my favorite surgeons.
SURGEONS. Er...guys. You coulda warned me you were sending the surgeon in!
I looked at him and said, "Well, it can't be a good sign that I'm seeing you!"
And, it was decided that she needed surgery...while there isn't a 100% definitive diagnostic test for appendicitis, he (and the radiologist) were quite certain that there was a "large, angry appendix" residing within her little body.
Consents were signed, vitals taken, the OR notified, our "place in line" secured...and we waited for our number to be called. (Figuratively...not literally...well, kinda not literally.)
At 11 pm last night, we kissed our baby girl good-bye as she was wheeled back to the operating room, in the hands of an anesthesiologist who blew my socks off. He was so incredible with her. EVERYONE was so incredible with her.
And SHE was incredible.
As my (previously) medically anxious (read: freakazoid) child, I was very afraid how Belle would handle this. Whether it was strength from the multitude of prayers being sent her way, or whether she was just feeling so crummy she was ready for relief (both?), she was a rock star!!
Her surgeon said her belly was quite sick...her appendix didn't appear to have ruptured, although there was a "gangrenous" area that made him question whether it hadn't ruptured earlier, then sealed itself off. She has peritonitis and lot's of inflammation in her belly...but we're headed in the right direction! 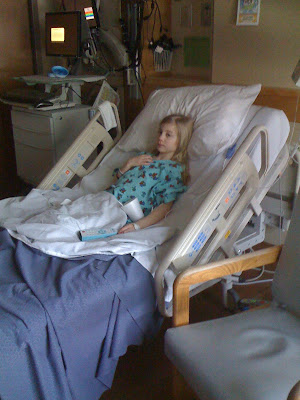 Pain is well controlled, slowly advancing her diet, fever free so far today...tomorrow we will recheck her white blood cells and see if they're decreasing, then make plans as far as discharge goes!
Thanks for all of your prayers and thoughts and kind words and encouragement!
Oh, FYI--Five Question Friday is on hiatus this week...due to obvious reasons! (And, it has taken me all dang day to write this post...lot's of visitors and interruptions...not to mention the 8 billion words I just left you with to read!)