December 05, 2011
We've lived in this house for a little over 7 years.
We've added an additional two children during that time.
We've had somewhere around 30 birthday parties since moving in.
We've had 7 Christmases...times the number of people in those years equals something like 45 gift openings.
Which means there's been a whole lotta "stuff" coming into our house.
We've taken "stuff" out of our house a whopping...get ready for this...
ZERO times.
Well, I lie. A random bag of out grown clothes here and there have made their way to various charities, but nothing big.
Nothing of this magnitude.
So, y'all know about the "Great Toy Purge of 2011"...still a work in progress, yes...and now we've added the "Great Get Rid of all this Crap Purge of 2011". I (painfully, through many tears and lot's of "Oh, HONEY! Look at this one!") sorted through 4 totes of baby clothes and shrunk it down to one.
One little tote filled with the stuff that is so cute I just can't bear to part with it, so I'm saving it for future nieces or nephews.
It all started with reorganizing our girls' closet. My Belle is a fashionista...has loved receiving clothes since she was a wee little thing, and her dresser was so full of clothes, that she could hardly open her drawers. Which meant that she really only wore a small portion of clothes since she couldn't open (seriously...couldn't physically open) her drawers to really see what was in them.
I SOOOOO wish I had taken before photos, but, well, we went out last night and Mama might've had a few too many drinks and stayed up WAY later than a good Mama should and well, I was feelin' rather punk today. The brain was not functioning at 100%.
I do have an afterish (again...work in progress) photo, however: 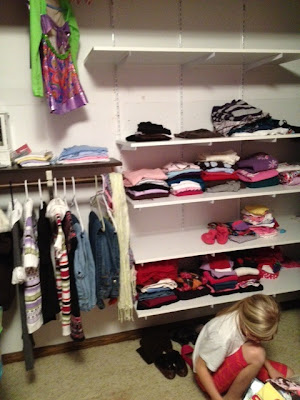 Before it was one long hanging dowel with little shelves on the very right of the closet and Belle's dresser smack in the middle (I have a thing about dressers in bedrooms...they take up too much space).
We did the open shelf concept with The Pal when we added his room, and it's worked well for him, so I figured we'd do it for the girls...I can NOT believe the space it's given us! And, there is still a lot of organizing to do as aforementioned fashionista is also a bit of a hoarder and needs to purge some of her own stuff! (Band-aids from her appendicitis conundrum earlier this year, anyone?)
I am so looking forward to lightening up this house! Still a ways to go...but wow, when I think of it, probably a hard day's work and we should be done!
Now...if only it were that easy to make ME lighter...package up some love handles and saddle bags and take them to the nearest Goodwill...
Wouldn't that be nice?! ;)