Last Saturday, we decided to go to the afternoon mass at one of the churches in our area. We were seated near the back, shushing our kiddos and trying to get them to stay still (hence, my "sit near the front" belief) when a great, big man came to sit in front of us.

It was when he tapped the gentleman on the end on the shoulder, that I noticed that his arrival and choice of seating made him the third of three single men in a row. And suddenly, my mind was on hyper-speed. I was weaving tales and theories and wondering what sort of life stories these men held. 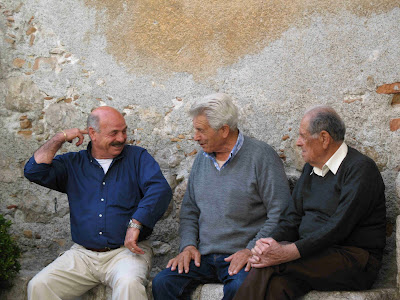 The first, was a slight man, with a head full of silver hair. Very well groomed, very reverent, and he held himself well. I imagined he lost his wife of many, many years, and that is why he was in church alone. His attire and the way he held himself, made me think he held a high position in life.

A doctor. A lawyer, maybe. And I imagined that he missed his wife, dearly.

The middle man, in my mind, was a hard worker, successful in his own right, but never wealthy. He, too, was well dressed, but in much more dated clothes...navy blue, polyester Levi's, a blue floral cowboy shirt, dark gray hair that was heavy with Brill cream. While this man was taller than the first, he was very thin. Too thin.

The kind of thin that made me imagine that he, too, had lost his wife. His best friend. His cook. Someone who took care of him, and when she left this world, he was lost as to how to care for himself.

The third man, the big guy who walked in and caught my attention was clearly a laborer. With hands that rivaled the Hulk's and were covered with deep gashes and cuts. His fingernails were dirty. Not dirty like he was unclean, but the kind of dirty one can only get from working with their hands day in and day out.

I imagined him to be a life-long bachelor. With no one to care for him, no one to nag him to clean under his nails, no one to remind him it was time to get a hair cut. I deduced that he was not wealthy. The least well off of the three, but likely, the hardest worker of all of them.

(Can you tell I didn't pay much attention to the mass that day?)

Just last night, I said to the Mr., "Did you notice those three men in front of us in church?", as they were still on my mind.

"He's one of the Johnson brothers. Do you have any idea how wealthy he is?!"

A laborer with a lot of land that he just sold for some big bucks. A life-long bachelor (I was right on that one!) who, likely, has more money that the two gentlemen next to him, whom I was CERTAIN, were much more well off than the big guy.

Just goes to show you that you really CAN'T judge a book by it's cover. (And, also, that first impressions aren't always right.)

And that maybe next time, I should just pay more attention to the mass!

(However, now I want to know the stories of the other two men...)