July 26, 2011
First things first, my friends, let's clear something up. Kelli...Joe is OURS. Hands off. You hear? Don't you be wooing him over to those dang (but awfully dashing) pinstripes with promises of World Series and stuff, mkay?
OURS. End of story. ;)
And, Andrea. Andrea, Andrea, Andrea. Mauer. Joe Mauer. 6 feet 5 inches of pure, athletic handsomeness. *swoon* 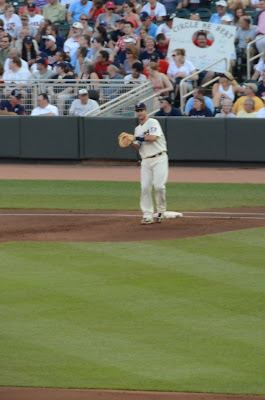 Okay, onto the "rest of the story"! So, we get to the game, and, mind you, the Pal is a HUGE baseball fan so he's ticked that we get to go and he's staying home, and I text him a picture from our seats, asking "How're these for seats?"
His response? "Let's just say I wish I was there, you suckers!" 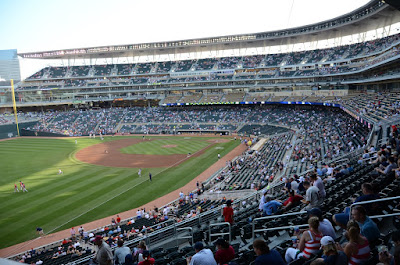 Turns out that "Target Field" ranks right up there as one of the best stadiums, "not a bad seat in the house". I don't know who hands out these "rankings", but I'll take it. MinneSOOOOta needs some of these "the best" rankings. And, I'd have to agree...Target Field is pretty awesome, even to my inexperienced eye.
The game ended up being a "pitcher's battle"...3 up, 3 down, 3 up, 3 down. Not a lot of action with hits and runs and outs and plays, but (if you are as into baseball as the Pal is) apparently it's still just as exciting to watch a pitcher's battle play out.
As much as I love baseball, I've gotta admit, after a few innings, I was more interested in what I could score to eat than what was going on on the mound. I've discovered pitcher's battles aren't really my thing.
But then...BUT THEN!! Bottom of the 9th, and we're down 0-1. My handsome Joe gets a walk, Cuddyer ("cuh-DYER" like dye. Hair dye. dyer.) gets a hit and with "aggressive base running" (as I was so informed by my son) gets a double...so we have runners at 2nd and 3rd...and guess who's up? 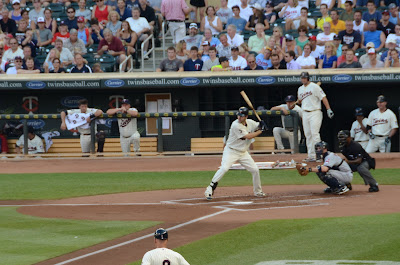 Jim Thome. Who? You say? Well, I'll tell you... Jim Thome recently hit his 596th home run (psh...I could so do that)...and it was a 490 ft homer. He CRUSHED it...but that wasn't this game. Anyway, they intentially walk him. (No tries. Just pitch him the ball, fer dang sake.)
So now, it's bases loaded.
And, Joe's biggest competition (for my admiration) is up...Danny Valencia (seriously, he is adorable. These boys are so stinkin' cute I can hardly stand it.). And...
And...
And he hits a single (I was so informed, by the baseball "know it all" in our family, that it was a "walk off" single...as in, it was the hit that won the game that allowed the team to "walk off" the field. Now you know.) and Joe-baby and Cuddy score and WOOOOO HOOOOOO!!!!! The crowd goes wild! 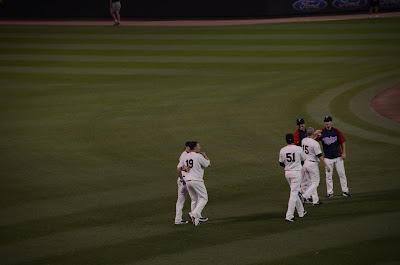 Then my phone vibrates and I see a text from my baseball fanatic that says, "You two hardly pay attention all season then you GET TO SEE THE BEST GAME OF THE YEAR!!!!!" 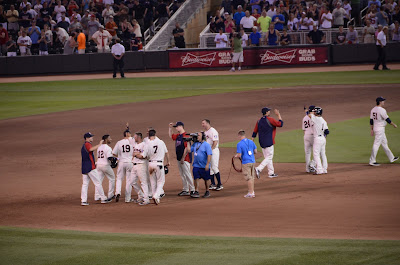 Poor kid. I actually felt a little guilty.
For a second.