July 25, 2011
Wow...where does the time go?! I meant to write about this right after we went, but I guess the crippling heat devoured my brain and my energy and all ambition I had to formulate some sort of interesting and captivating post.
Well, fear no more! (Wait...were you fearing?) I have the "Twins Post" for you!
Twins...you know, the baseball team? Not the two babies at one time thing. 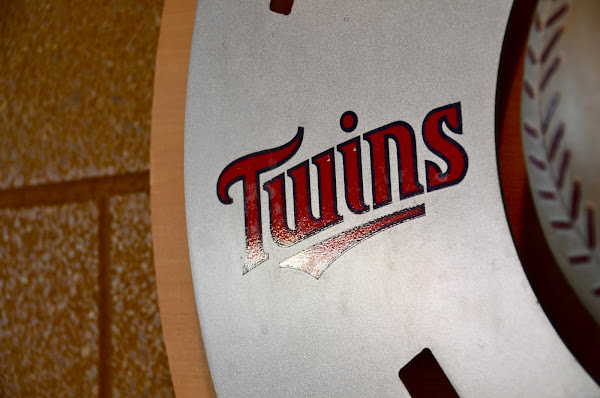 Okay...focus, mama...so, last week, the Mr. and I (and his brother and his wife) received some Twins tickets for a Tuesday evening game. Having never been to the brand new Twins stadium, aka "Target Field", I said, "HECK YES" to that gig! (Plus, there was the added benefit of seeing my boyfriend, Joe, playing a little ball. Shhhh...he doesn't know he's my boyfriend, so let's just keep that between you and I, okay?) 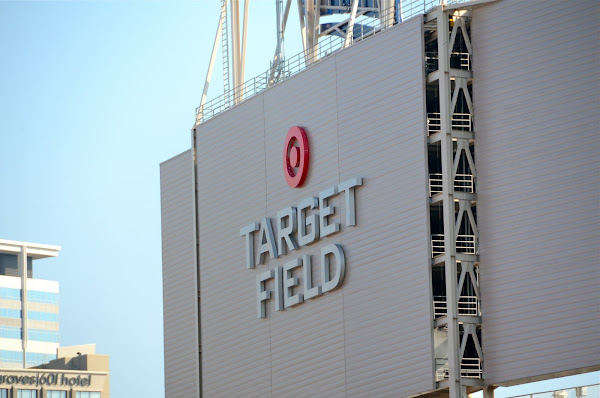 We arrived way early and, oh, let me interject...this game was SMACK DAB in the middle of the sweltering heat wave that threatened to kill off all of MinneSOOOOOta with heat stroke...had ourselves a little "sociable" before we set off for the stadium.
Wait...another interjection here...my SIL. She's 31 weeks pregnant. Heat wave. Pregnant. Labor Nurse. Let's just say I'm lucky I'm still alive with all the "Are you okay?" and "Do you need anything?" and "Are you SURE you're okay?"'s that were coming out of my mouth. Lucky for me, she's patient and/or very tolerant and just kept repeating to me over and over that yes, indeed, she was okay. 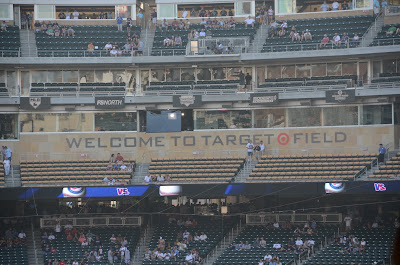 I've gotta tell you...living in rural MN, where baseball fields are around every corner and turn and sometimes even in people's backyards, it was quite the sight to see this ginormous stadium right in the center of a metropolis. 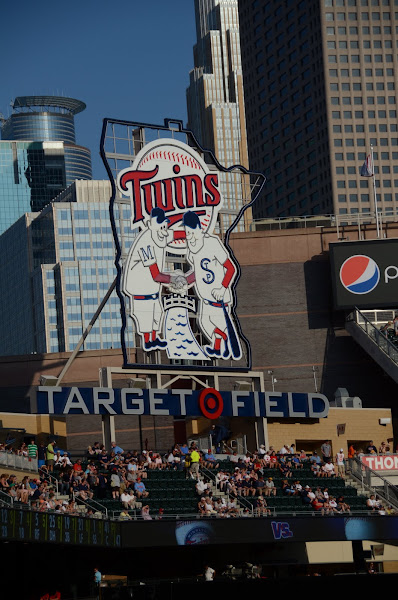 We walked up to the stadium, and suddenly the smell of hot asphalt (and my failing deodorant) was overcome with the scents of a baseball field...mini donuts, hot dogs, french fries...actually, it was just, plain and simple, the smell of grease.
And it was heavenly.
Being we were still quite early (and the small minor detail of needed to meet the dude that had our tickets) we burned some time walking around ("are you okay?" "are you too hot?" "do you need anything?") and having a bite to eat and a drink. 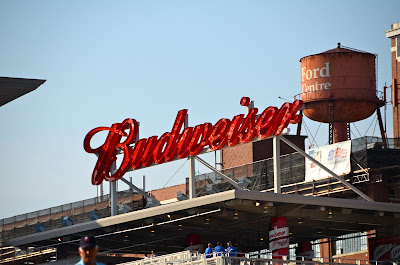 We finally got our tickets, made our way inside, and were surrounded by "Princesses". Seriously. Chicks in tiaras and sashes and boas. And they were walking around the field. And suddenly, the Mr. bolted ahead and started talking to the one in front of us (whose husband, I kid you not, had sweat marks in the shape of angel wings on his back. I kinda wanted to stick by his side...). 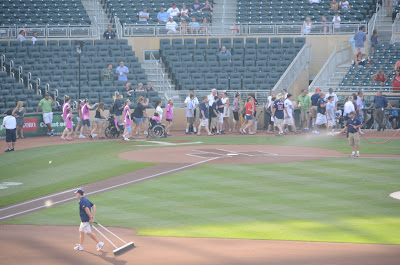 We found out she was a former Centennial Queen or Princess or something or other...to be honest, I didn't care. I had one thing on my mind.
Number 7.
Boy's a hottie. And, kid can play some ball. Apparently, he had the option of playing football or baseball in college. Read an article once that said he and some buddies got together for some pond hockey and he was the best player...even though it was his first time on skates.
Gotta appreciate that kind of athleticism. (Even if there was the whole "bilateral leg weakness" thing this year. I'll forgive him.)
And, holy man is this post long! Stay tuned for Part Two of "Joe...He's Huge."