June 14, 2011
Feelin' all spunky and worked up about something...
Remember when I wrote my "Refeminization of America" post? That in which I proclaimed (while disclaiming that I WORK OUTSIDE THE HOME!!!) that America needs to be refeminized?
Well, recently, my teenager and I were having a discussion. I'm not entirely sure how it got brought up, but I learned something from him that day. I learned that if a girl goes out for football, she has to be accepted by the team, but that a boy can not join the girl's volleyball team. (For the record, we live in a smallish school district...no "girl's football" team [do they exist?] and no boy's volleyball.)
Now, this is something that ticks me off. If this "feminist movement" created equality among genders, then why couldn't my son go out for volleyball if he wanted? Shouldn't he be seen as an equal among peers and accepted just as a girl would be (should be) if she joined football? 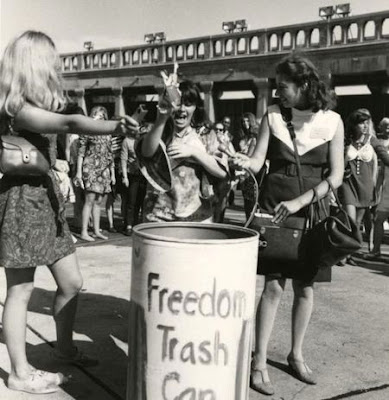 (Image via Google)
Something about this seems wrong.
As in, "Yes, girl's are strong enough, athletic enough, brave enough to join football"...but boys can't join volleyball because they'd potentially "take a girl's spot on the team"? Aren't we supposed to be equals? Best athlete gets the spot, regardless of gender, right?
He also told me (and, I'm totally taking his word...I've done no research on this, none at all, so forgive me if this is incorrect) that in collegiate level athletics, there has to be an equal amount of women's to men's sports. And funding gets split 50/50 among the teams (i.e. men's hockey/women's hockey share funds...men's basketball/women's basketball share funds, etc.).
So, as is the case of our local state college, our men's hockey team is a Division 1 team...women's hockey? Well, what's the lowest division...cause that's what they are, and then a few levels down. Men's hockey = HUGE income...women's hockey = income eater.
And yet they are supposed to split funding 50/50?!
And...AND!!! (Ohhhhh, I'm not done yet!! Oh no!) If a women's team is cut due to funding reasons, the equivalent men's team has to be cut as well. So, a school is struggling, just like the rest of America, and they can't cut a women's hockey team that is not only NOT bringing in income, but draining funds on top of it, and we can't cut that team?!
Instead, this state college was on the verge of cutting it's D2 football team...which brings in a whole heckuva lot more (but still not enough) funds than the women's hockey team, because of some stupid ratio rule?! (Alas, have no fear...alums coughed up enough funds to keep the football team.)
UGH. I'm getting all fired up, again, just writing about it!!
Even if I were into this whole "feminist movement", this seems like a reverse slap in the face...like, placation (is that a word?). "Well, girls, you really suck so badly that you're draining our reserves but we can't cut your team so we'll just keep on letting you pour our money down the drain and instead we'll cut our football team, 'cuz, you know, they're guys and all and we can do that to them." And as women, we're supposed to be proud of that?!
We're supposed to jump up and down and burn our bras and wave our fists at the men, when in reality it's the women who are bringing things down?
I concluded the conversation by agreeing with him that this was insane...and, I may or may not have said something along the lines of, "the only thing the feminist movement was good for was allowing women to vote".
Excuse me now, while I go fish my bra out of the fire and put it back on.