June 24, 2011
I'm lying here in bed at 10 o'clock, beside my baby that's been asleep for 4 hours, after just having tucked in E.W. who's got some kind of bug brewing and trying to whip out this post before my Benadryl kicks in and I fall asleep, drooling, on my computer.

Yowza...let's hope we're not about to become the sick house.
Anywho...word on the street is that we're supposed to have a pretty decent weekend. 'Course, I'll believe it when I see it, but I am SO ready to kick this crappy weather to the curb.
Okay, let's get the Five Question Friday party started!!
To everyone new...WELCOME!! I'm glad to have you join in and I hope you enjoy yourself!
To everyone "old"...WELCOME!! I'm glad to have you stickin' around and playing along!
Rules for 5QF: Copy and paste the following questions to your blog post, answer them, then watch for the linky to appear Friday morning!
Questions for Friday, June 24th: (Special thanks to @TheSpunkyDiva, @dosweatthesmall,Maryanne, AdventurezInChildRearing, and Pam for their question suggestions! I love to link people in #5QF, so if YOU would like to be linked, head on over to my community to offer up your best question suggetions, or shout 'em out to me on Twitter. [Remember to@5crookedhalos me and use hashtag #5QF])
1. What is your current favorite tv show?
2. What's the worst haircut you ever got?
3. What was something that you did as a child that you thought you were so cool for doing?
4. Do you have any GREAT frugal family fun tips?
5. Would you drive across country if you had the money to fly?
-------------------------------------------
1. What is your current favorite tv show?
Well, see, we have this thing called "no TV", so I dunno. Wait, scratch that...lest anyone call me a liar, we HAVE a TV...just no channels. Not a single one.
Not public television, not nothin'. The Mr. said, one time, that he could "almost" make something out through the static...but that's as good as it gets around here!
However...I do get to enjoy a little tube time on my breaks at work and man alive!! I am searching out HGTV whenever I'm there! "House Hunters" is one of my faves...it blows my mind to see what people pay for houses in certain areas of our nation!
Craziness!
2. What's the worst haircut you ever got?
Well...there was this: 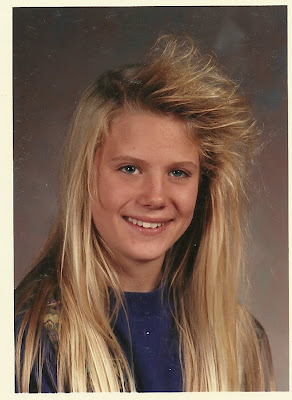 But that's not so much a "cut" as it is a "do"...so, I'll tell you about this one time (say it with me..."at band camp"...) when I was a senior in high school. A friend's mom told me she had this haircut that she thought would be adorable on me.
So, I let her do it.
And I was appalled. I think I may have even cried...but, looking back, I'm pretty sure it was the "Rachel", before anyone had ever heard of or seen "The Rachel". So, I was trendy before I knew it and couldn't appre...WAIT!!
Hold it. Stop the presses!!!
What if...just follow along with me for a second here...WHAT IF...some producer from "Friends" saw me somewhere in Nowhere, MN and said, "OY!! THAT is the hair cut for our lead in this fabulous television show we're going to do?! THAT is the hair cut that is going to change a generation of hairstyles!!!!" (Never mind that I wore my hair back in an oh, so stylish, half pony until the layers grew out...just never. you. mind.)
WHAT IF?!
That means...OH EM GEE...THAT MEANS that "The Rachel" is really "The Mama"!!!
Excuse me for a second, I need to catch my breath. This is big...
3. What was something that you did as a child that you thought you were so cool for doing?
Okay, I'm back now. Phew. Wow. "The Mama", who knew?!
Um, focus mama...yeah, question 3. So...aside from the above bang catasrophe of 1989, I totally thought I was the cat's meow for tight rolling my pants. And, pinning them too. Oh, and then there was the whole bib-overall/one strap off the shoulder with crazy oversized t-shirts look.
Cute.
Speaking of tight rolling pants...my baby bro was getting ready for work the other day when I was at my mama's (wow..."The Mama"...I spurred a trend...) and somehow we got talking about tight rolling pants.
Kid didn't have a clue what I was talkin' about...so, I showed him. Right there, I got down and executed a perfect tight roll of his right pant leg.
He was speechless. I'd like to think he was in awe of the awesome style back then, but really, I think he barfed in his mouth a little and was afraid that if he said anything, his lunch would come spewing out.
So, when do you think THAT style is coming back?
4. Do you have any GREAT frugal family fun tips?
Well, this one really ties into #5 for me...so, I'll answer 4 and 5 below!
5. Would you drive across country if you had the money to fly?
This is a hard one for me...I hate flying. LOATHE it. (Then, I happen to catch a news clip about how, IN MINNESOTA, two planes came within 100 feet of each other due to some pretty crappy air traffic controlling...yeah, that didn't help my loathing.) But, as much as I loathe it, sometimes, logistically, it would make more sense.
For example...one of the Mr.'s bros lives in California (centralish, I believe) and we've never been out to see them. Flying = money we don't have to just throw into trasportation. Driving = traveling in a vehicle (van), pulling a camper, through mountains...or, taking the long way and avoiding the mountains but taking gobs of time off work.
However...after last year's road trip to South Dakota, I have fallen in love with roadtripping (save for the ride home. Ugh.). We created such great memories and had such a fun time, that I can't help but think of traveling across the country with my family in a vehile with nothing but warm fuzzy thoughts.
And that, is also my frugal family fun tip! Take a road trip...make the drive JUST as much fun as the destination!
Now...where should we roadtrip to this year? Suggestions????
--------------------------------------
And now, it's YOUR turn!