Last night, I made a mistake.

April 06, 2011
Two weeks ago tonight, I made a decision that turned out to be a very good one. 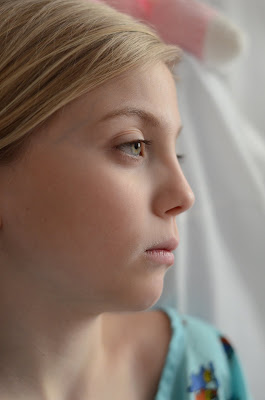 I'll admit, when I decided to take Belle to the ER, I second guessed myself the whole way there.
Was I overreacting? Was I going to be "one of those moms"? Is she really as sick as I think she is?
Those thoughts were on continuous play through my mind. I am equal parts entirely relieved that I made the decision to go and angry with myself for letting it go on as long as it did. And even angrier because of something else.
I made the mistake of googling things associated with appendicitis. "Peritonitis" was the big one I was googling...and mainly because, in the deep recesses of my mind, I am afraid that by me not seeing the signs of Belle's appendicitis, that I may have caused her long term damage.
She has some important, and very delicate, parts in the general vicinity of her appendix that she will need later in life to become a mommy...and I was/am so afraid that her infection might have caused some damage to those parts. So afraid, in fact, that I haven't even voiced this anywhere else...to anyone else.
BUT...while I was googling "appendicitis" and "peritonitis", there was something else that frightened me to my core. The words "mortality rate" and "sepsis" leaped off the screen at me. I know peritonitis is very serious...but I guess I didn't know just how serious and dangerous it could be.
While we were in the hospital, I don't think I really grasped the danger that our sweet girl was in...and now that we're out of it...I can say that I am somewhat relieved that I didn't realize at the time (or, maybe, my mind wouldn't let me go there) how sick our Belle was/could get.
What I now know, is that I am even more grateful for the care she received, for the wisdom of the doctors, for medical advancement, and, MOST OF ALL, for all of the prayers that were offered up for her.
God is good!!
Oh, and one more thing...Dr. Google is for the birds. Don't do what I did...you'll find yourself with information that leaves you with massive amounts of worry, and none to reassure you.
Stupid Dr. Google.