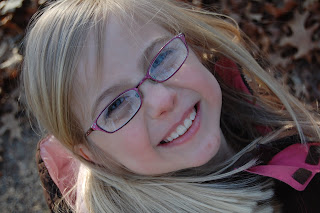 Apparently has a class of "Mean Girls".
One little girl in her class has already been on my radar, when, in kindergarten, she called our home new fewer than 87,000 times one weekend we were gone and proceeded to leave 87,000 messages and then tell our daughter she was "stupid" on some of said 87,000 messages.
RAWR!!!
She seemed, possibly, though that perhaps she was growing up, getting better...so, I've been working on giving her the benefit of the doubt. (Even tho' she still raised my hackles...)
Well, yesterday, at lunch...my sweet Miss E. got her lunch tray and went to sit beside S. (message girl) and K. They got up and moved...and in E.'s words, "Mama, they hurt my feelings so bad, they made me cry."
Then, they proceeded to keep running away from her at recess.
It sounds like the "cause" is that one other girl in their class was doing her work quickly, and Miss E. went over to work with her. Apparently, they didn't like that.
Why do girl's have to be so mean?
I will be the first to admit, that my daughter (or any of my children, for that matter) is not perfect. I know that she makes mistakes...and I also know that there are two sides to every story.
But, I'm at a loss. How do I handle this?
Do I call the parents? Do I teach her skills to deal with mean kids (and what are those skills?)?
I do NOT want to be a "helicopter parent" and swoop in to rescue her from every difficult situation...but I also don't want her to hurt.
In her words, "They hurt my heart."
And I don't like it when someone hurts my baby's heart.