I decided to join in the Cop Mama and her Monday meme...except it's Tuesday...and for some reason, I really hate the word "meme". It annoys me.
But anywho, I digress...
Kids clothes.
And me.
We have a thing goin'.
I have this little issue...this hang-up, if you will...I can not buy used kids clothes. Actually, scratch that, I can not buy used anything. I touched on it here, but I'll tell you more now.
Oh, I'm sure I could try to blame it on my "middle(ish) child syndrome", but that's not it. I was the only girl.
Rarely did I want for anything. Except for that Nintendo that we didn't have that relegated us to "scum of the West Side"...until our grandparents rescued us from the bottom of the West Side social bucket and bought us one.
Phew. It was social suicide if you didn't own a Nintendo when you were 10.
Okay...back to clothes. Here's where I get weird.
So, I won't buy used clothes...but, I'll allow my children to wear these: 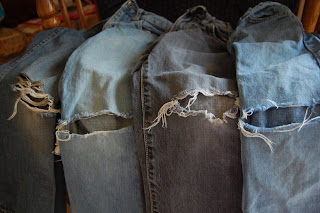 Yes...I believe in hand-me downs. If my own child (or occasionally a close friend/relative) owned it and wore it first, I will pass it down.
My Baby Girl is wearing clothes that Miss E wore as a wee one...but, I usually only save the "best of the best" when it comes to Miss E's clothes.
Now...my boys, on the other hand...came one right after the other. So, that saves me the work of deciding which clothes are "cute enough" to save, because typically, they just go from E.W's drawers right into Little A's.
I'm discovering though, that little boys are harder on clothes than little girls. Miss E.'s never had a pair of jeans that looked like this before: 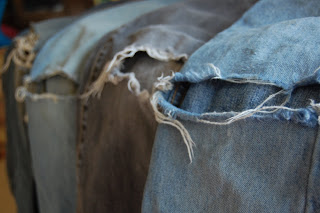 As spring is approaching, the frugalista in me is refusing to buy more jeans for E.W, currently, he owns 2 that don't have holes. Ugh. I've even tried buying "more expensive" jeans to see if they'd hold up to the force that is E.W.
No dice.
I'm just hoping that we can get through until short season is in full swing!
Please tell me you don't think I'm a total snob...because I can't...believe me when I say "I can't"...it's not an issue of "can't vs. won't"...I literally can NOT buy used clothes. It makes me all tense and sweaty and creepy crawly feeling. I know it's wrong. I just can't help it.
Please forgive me.
In all other areas, I promise I'm a really nice, kind, considerate, generous person.
I think I need therapy.