March 24, 2012
One year ago, around midnight last night, my babe was wheeled out of surgery and her surgeon confirmed that she was, indeed, a sick little girl with a nasty old appendix inside of her. Well, actually, he had just taken out that nasty old appendix.
Wow...that was a long week. Now that we're a year removed from it, it sort of feels "surreal" too. 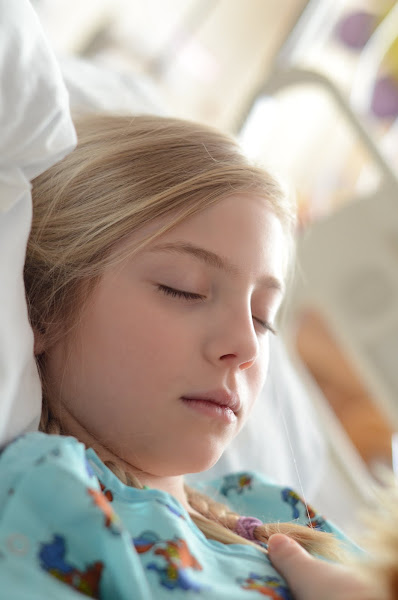 I read back through all of those posts and find it, simultaneously, hard to believe it ever really happened and feeling like it was just yesterday that it happened.
I realized that I neglected to tell you a funny story about the night of her surgery. We had been settled on the Pediatric floor, I had fallen into that sort of "sleeping with one eye open" kind of sleep when I realized the nurse was in our room I woke up, kissed my Belle and discovered she was burning up.
The nurse confirmed that she had just checked her temp and was getting some Tylenol to treat her fever. Belle was starting to stir, so I quietly got close to her face and began reassuring her, "It's okay hon, mom's here" and kissing her cheek, rubbing her forehead, whispering to her what the nurse was doing and she seemed to be getting more and more agitated the more I tried to reassure her.
Finally she said, all groggy and loopy, "Get...OUTTA HERE!" and I quickly sat back and looked at the nurse who had immediately stopped what she was doing and looked at me. We were both perplexed.
Gingerly, I said, "Who, 'get outta here', hon?" thinking, of course, that she, most certainly meant the nurse and not her loving, doting, worried, reassuring mother.
"YOU!" she said to me.
The next day we had quite the laugh about it as I told my family...she said, "Mom, your breath was stinky and you were so HOT." I think SHE was the hot one and me being close made it worse!
Anyway, we tease her about it to this day.
Here are some more things that were kinda vague in those posts (I realize now)...(PS...if you want to find them you can use the search box, above right column, and type "appendicitis" or use my archives and go back to March 2011...the first one is titled "Quick Update" and they go for several posts after that.)
Her antibiotics were initially underdosed. Her surgeon gained ALL of my respect when he totally owned up to and took full accountability for his mistake. As soon as she was properly dosed, her fevers went away...coincidence or not, you decide!
I don't really think she ever had a yeast infection. She never had "those signs". She was having pain when she peed, but is was internal...like where her appendix used to be. I'm now convinced it had to do with inflammation and things shifting as her bladder emptied. But what do I know, I'm just the nurse.
I still struggle with guilt about the whole thing. That I should've recognized it sooner. I joke (laughter makes me feel better) about what a "great nurse/mom" I was...not only did I wait so long that her appendix ruptured, but I waited so long it sealed over again! (Actually, I credit that one to her Uncle Verd for watching out for her.)
Our babe still struggles with what I called "PTSD"...she continues to ask (the tears have mostly stopped) "how long" when I drop her off at my parents if I need to run somewhere (dentist, hair appointment, etc.). She went there the afternoon I brought Belle to the ER for what we thought was just going to be a couple of hours...one week later, we were finally all home, under one roof.
My oldest recently told me about how worried he was. I must've played it pretty cool (actually, I still was in denial about all of her symptoms) when I took her to the ER. He said it was scary for him, hearing that she was going to have to have surgery and then he wasn't able to see her for a few more days because he was at his dad's.
So glad that it is all behind us. So grateful that things turned out the way they did...and hopeful that if something like this ever happens again, that I've been humbled enough to make that ER visit much sooner than I did.