March 19, 2012
When I was in my senior year in college, our school hosted a Father/Daughter Dance...it is one of the best memories I have!
A few weeks ago, I saw a blurb somewhere (school newsletter? paper? flyer? I can't remember) that there was going to be a Father/Daughter Ball in our community...because I had such fond memories of my own night dancing with my dad, I immediately (and very excitedly) mentioned it to Belle, who, in all of her tweenagerness was all, "sure".
Then I promptly called my husband to inform him of the event and he was all, "YOU DIDN'T MENTION ANYTHING TO BELLE, DID YOU?!"
And I was all, "Um...yeah? Why?"
And he was all, "I wanted it to be a surprise!"
And I was all, trying to bluff Belle, "Um...okay, oh, bummer, you can't go?"
And he was all, "What?"
And I was all, "Oh, that's too bad, she really wanted to go."
And he was all, "Huh?"
And I was all, "Gosh, well, hopefully they have one next year."
And he was all, "What are you talking about?!"
And I was all, "GOSH. TOO BAD. YOU WOULD'VE HAD SO MUCH FUN."
And he was all, "Um. Huh? OH!!! You're trying to throw off Belle!!!"
And I was all, *gigantic sigh of relief that he finally caught on* "Yes!!!!!!!!!! I know you would've had a blast."
Phew. Glad that went so smoothly. ;)
Later that night he told me he wanted to ask Belle in a special way...complete with flowers and stuff.
Belle was onto us though, she pulled me aside and grinned, "Mom, I think you and dad are teasing me. Dad acts silly when I ask him about the Father/Daughter Ball."
And I was all, "Um...what? Oh LOOK!! A banana! Bananas are so good. You can put them in cereal and make banana bread and banana cake and listen, I have a song to help you remember how to spell bananas...*insert "Hollaback Girl" here* B-A-N-A-N-A-S!!"
*Insert confused and quizzical look from Belle here*
And then I ran away from her as quickly as I could. I already blew it once, wasn't gonna do it again!
Fast forward a week, and the Mr. "had to" run into the store after church. He came out to the van, opened Belle's door, presented her with a white rose and asked if she would go to the Father/Daughter Ball with him.
Sooooo sweet!
Last night was the big night. Belle had picked out a new dress the night before and the Mr. got himself a matching tie. I did Belle's hair into a pretty, upswept updo...made them pose for obligatory photos and then saw them off. 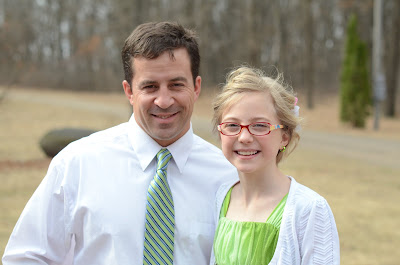 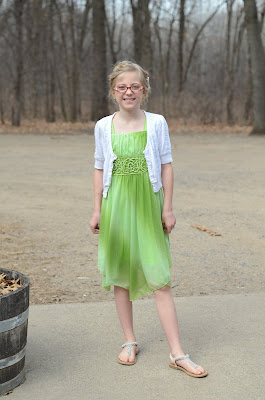 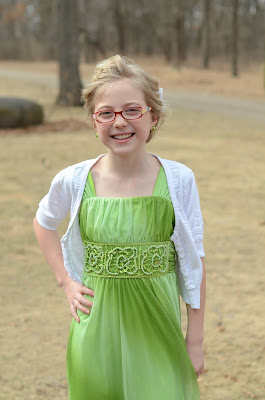 It was cute how Belle was a little awkward and embarrassed about the whole thing, but the Mr. said she had fun! The dads signed an oath to be upstanding Men of God for their daughters, to raise them up right, and pray for them. They had a delicious meal, then the dancing began! 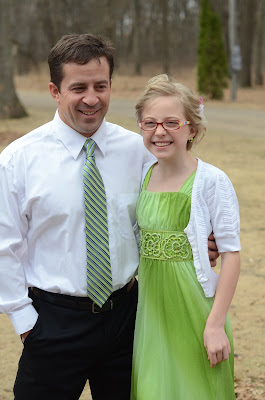 They learned the "Thriller" dance!!
5+ hours later, they came home. Belle was full of smiles and said her feet hurt...a sure sign of a good night spent dancing and having fun!
Hopeful that our community continues this tradition of celebrating Father's and their importance in their Daughter's lives!
(Stay tuned for more photos...they are residing in my husband's phone and *gasp* he's taking too long to text them to me! How rude.) 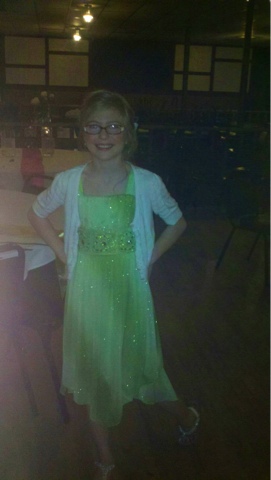