Life Lessons...Brought to you by Mama M.

September 12, 2011
Remember when I told you about my busy weekend?
At the last minute, the Mr. decided to take the three youngest kiddos with him to do a little camping. The Pal was at his dad's...and Belle was planning on spending the night at my Gram's with my aunt and cousin. (Remember this "aunt" part...it's important.)
Because I didn't have anything to rush home to, my friend and I decided to attend the wake of our friend's husband...both of us feel it's a little more personal to attend the wake, where you can get a chance to show your support face to face.
She is a pillar of strength, our friend.
Well, after the wake, the two of us were STARVING. Like, wasting away, starving. Malnourished. You know, THAT kind of starving. (Okay, okay...not really.) We decided to make a pit stop for supper, and wound up at a sport's bar. (This is all important, I promise.)
We order Bloody Marys, and I take mine spicy. Mmmmmmm...gotta love the heat. (Important statement, right there...)
About half way through my (incredibly delicious) Bloody Mary, my lips are on fire. I drink some water, I wipe them with a napkin, then I have the magnificent idea to try to put Chapstick on them to cool them.
Makes sense, right? (Please say yes.)
Oh no.
Uh uh. No siree.
NOT COOLING.
In fact: HOLY MOTHER OF GOD MY LIPS ARE GOING TO MELT RIGHT OFF MY FACE THEY'RE SO FREAKIN' HOT!!!!!
Cue watery eyes, much laughter, and a lesson learned.
Later that night, I was telling some people this story...and aforementioned aunt was one of them.
"Oh, nuh uh. That would not make a difference!" She said defiantly.
"Oh, YES, uh huh it did! They were burning right off my face!" I promised.
She: "I don't believe you."
Me: "Here, try it." *Rummaged through my mom's fridge to find some hot sauce...Frank's Red Hot it was.*
She: *Being a smart ass* Rubs it into her lips, "Oh, yup. Not hot. Not hot at all."
Me: "Chrissy...give her your Chapstick now."
She: *slathering Chapstick over her Frank's covered lips* "Oooooooh, not hot."
Me: *whatev* I head to the bathroom, because the scene of her slathering her lips was all to entirely hilarious for my bladder...I was very close to having tears of laughter run down my legs.
Upon returning from the bathroom, I hear hoots of laughter and see my aunt furiously dabbing her lips with a wet napkin..."THAT'S NOT RIGHT!!"
Me: BWAHAHAHAHAHAHAHAHAHAHA!!!!! "Neener neener!!! That's what you get for being a know it all!!"
She: *Places face under faucet* 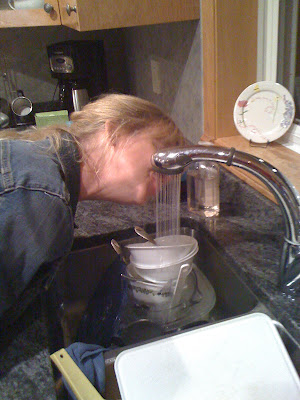 Me (and everyone else): Bwhahahahahahahahahahaha!!! (It's a good thing I peed before this whole scene, or I would've needed a change of clothes.)
She: "WHY? Why would it do that?!"
Me: "I told you! Why doubt me?!"
She: *Grabs cold Mike's Lemonade and holds it to her red lips* 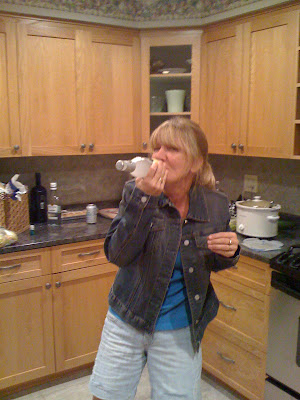 It took awhile, but she finally did get the raging inferno that was her lips under control. And that, my friends, in your life lesson:
Do NOT use Chapstick to cool your lips if you get hot sauce on them. 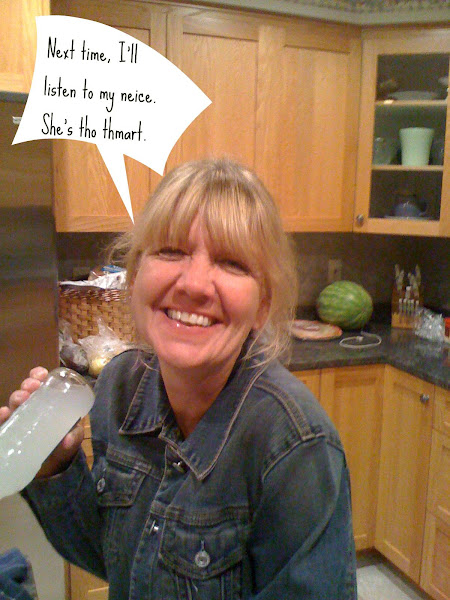 Laboratory tested by two people. End of story. You're welcome.
(Maybe I can consider this payback for the time she almost exploded my head. Even though it wasn't ME that rubbed the hot sauce/chapstick on her lips!!)