In the Kitchen with Gram...Hot Beef Sandwiches!

September 18, 2012
Gram's Hot Beefs...oh how I remember my childhood being filled with these! Interesting little tidbit...back in the day, Gram used to pick it up from the butcher, cook it, and bring it back to the butcher to have them slice it for her.

Well, we remedied that hot beef dry spell! Gram had the idea to cook it in the crock-pot and then shred it, rather than slice and oh my dear heavens, was it wonderful to have her hot beefs again! I think I almost cried. 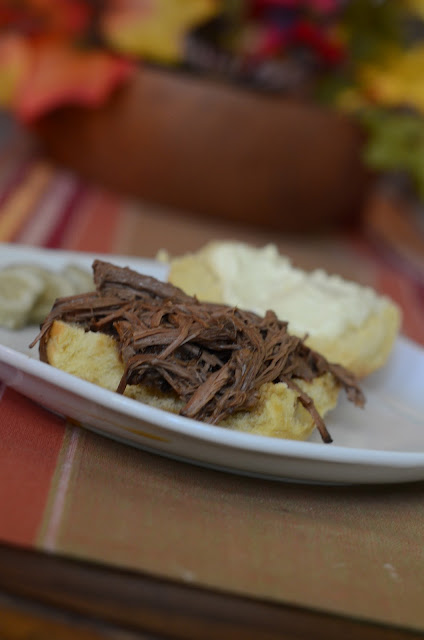 I'm also going to share her sandwich spread at the end...I used to think I didn't like it and I JUST discovered how ridiculously delicious it is! Secret ingredient involved... 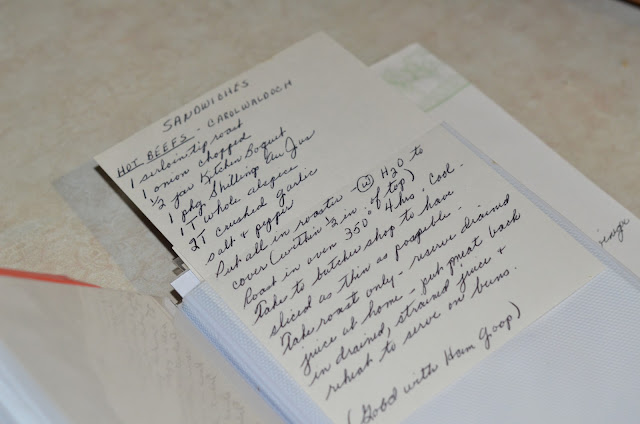 First, procure yourself a big ol' sirloin tip roast. You know all those people who are telling you to buy cheap roasts for your sandwich meat? IGNORE THEM. This is incredible...trust me.

You're gonna want to cut the "cap" off the roast, and get the "sliver skin" (or something like that) off from underneath it...a sharp knife will be your best friend right now and that cap should slice right off. What is the "cap" you say? That fat layer on the roast. This is what's left over: 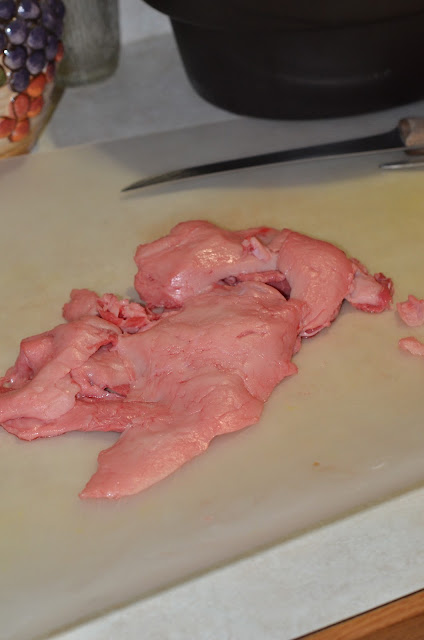 And this is what the roast should look like after it's been "de-capped": 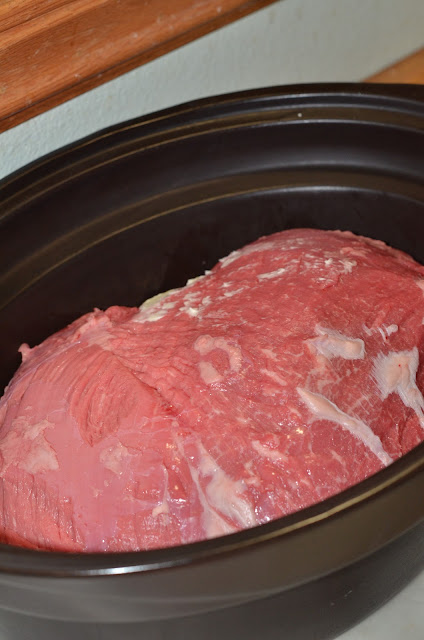 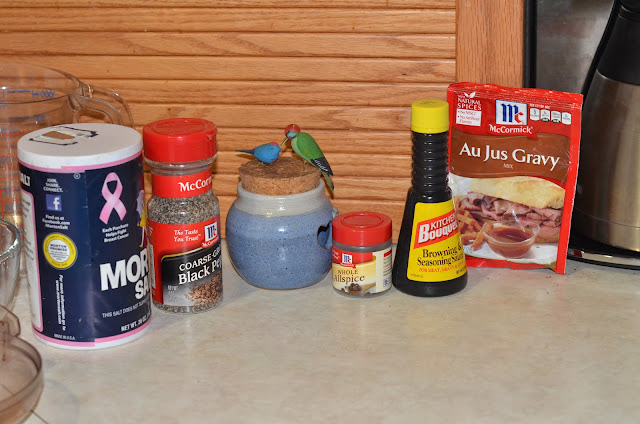 Begin by peeling your garlic and tossing it into the food processor... 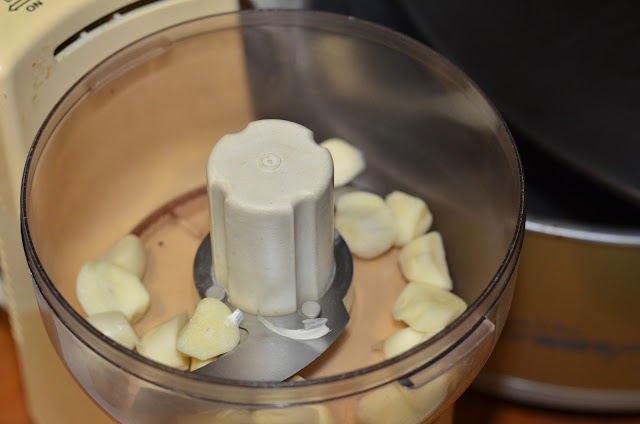 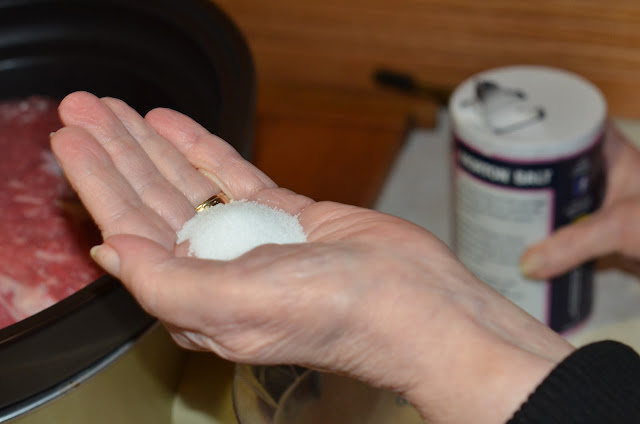 Remember, you're seasoning A LOT of meat. Sprinkle that salt all over the top of the roast. 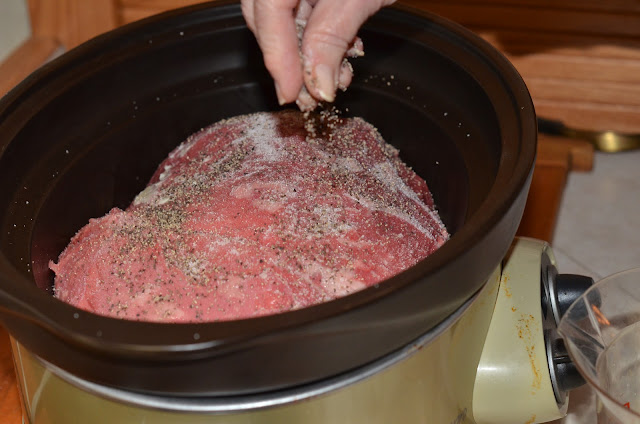 Again, all over the top. Now, for the fun part...you know those little steeper ball thingamajigs for loose leaf tea? They make great holders for allspice (peppercorns? fresh herbs? The possibilities are endless!) and then you don't have to fish the allspice out at the end! 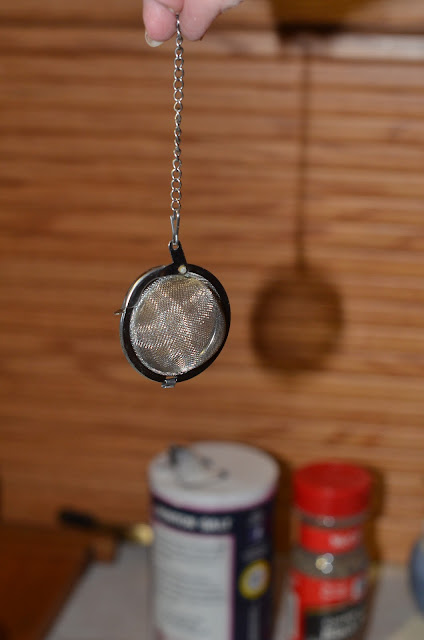 About 6-8 whole allspice will do...taste it a few hours in, if it's too "allspicy", remove them. Allspice, another lesson in "sometimes less is more"! 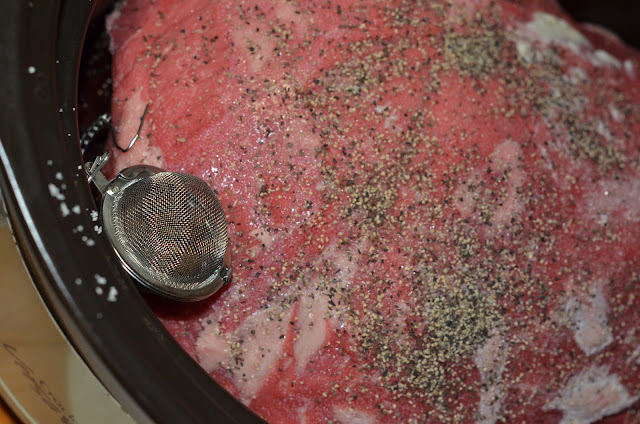 Now, for the sauce. 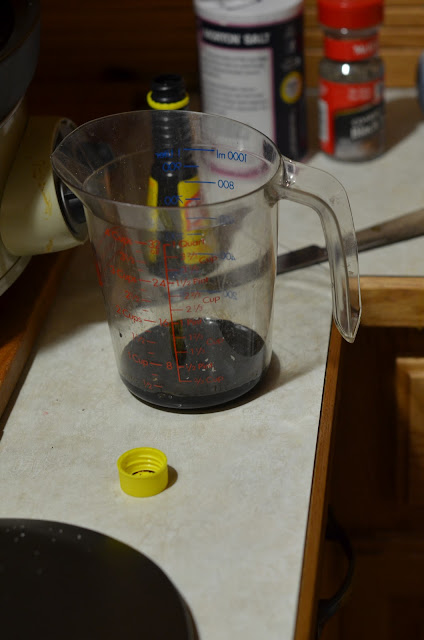 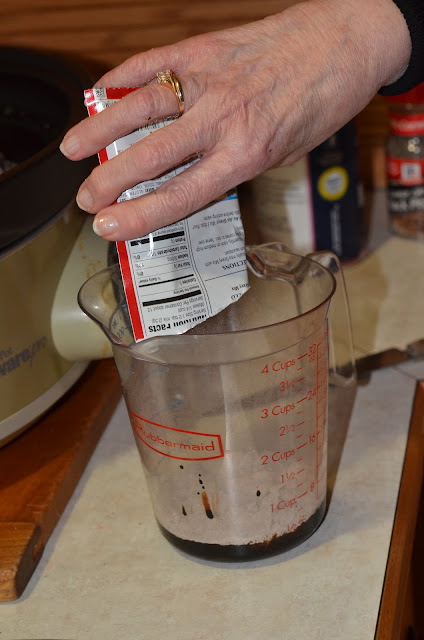 Whisk it up, then approximately 3 cups of water. I'll explain the "approximately" soon... 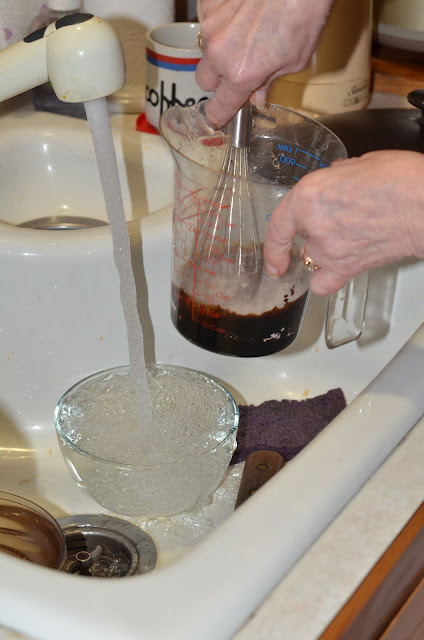 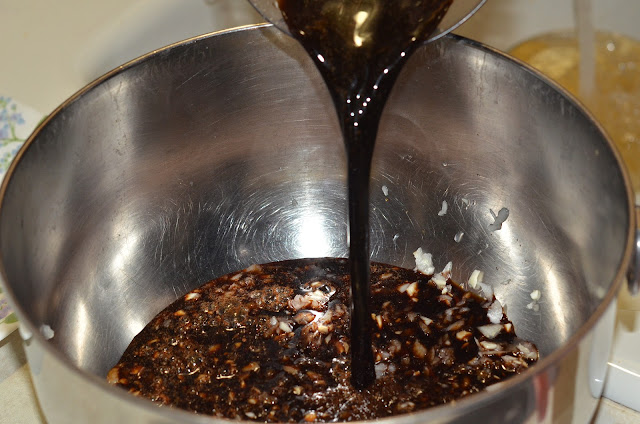 Stir it all around then pour it all over your roast...here's where the "approximately 3 cups" comes into play... 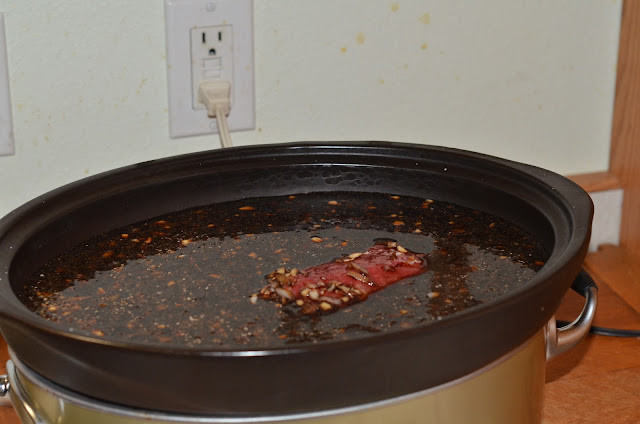 First, though, lift the roast a bit to make sure that the juice has made it's way to the bottom, "break the seal" so to speak between the roast and the crock! Now, you want the "juice" to be almost covering the roast, so, if after you've adjusted your roast and you discover that there is more roast showing than what's above? Add more water.

Now, turn your crock pot to low and let 'er go. We did this overnight, I image it was probably 10 hours or so, of cooking time. 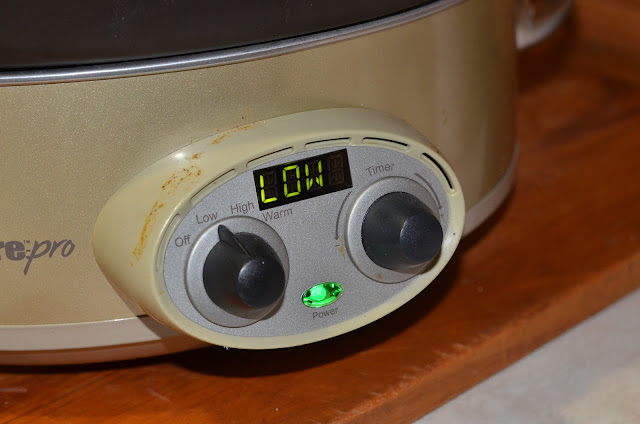 In the morning, it's time to shred that glorious, gorgeous roast up! If you have a deli slicer, set it to a thin slice and go to town. Since we don't have that luxury, we went the shred route. (And, it was still delicious!) 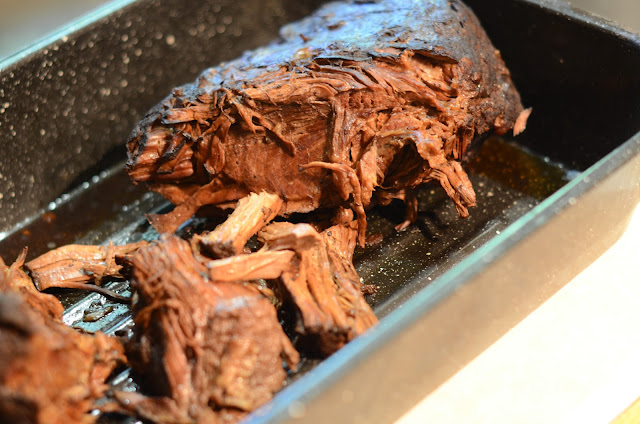 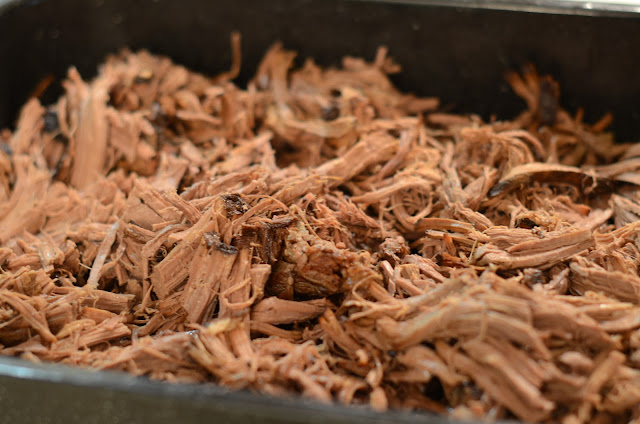 After you've removed the roast from the juice, DON'T THROW THE JUICE!! Do, however, strain it. If you so wish, which we do...then there's no, "EW! What's in this?!" to be heard from little lips. 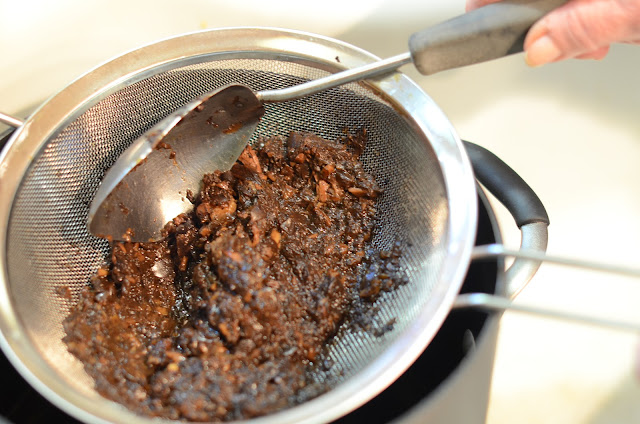 Anyway, after you're done shredding, put the beef back into the reserved juice. 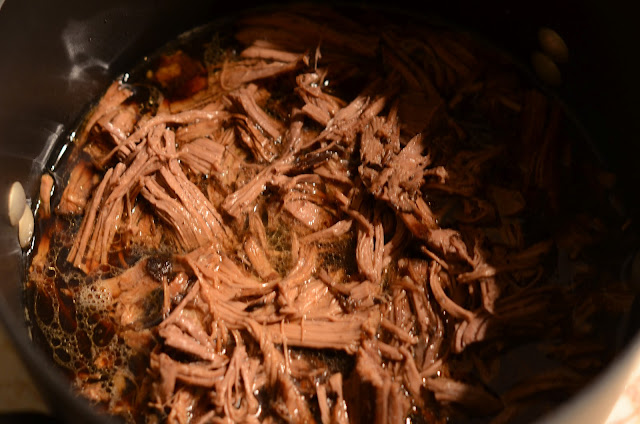 And, it's ready! This makes oodles of beef, so, freeze as needed, or serve to your hungry bunch! I also think this would make TO DIE FOR stroganoff.

Anyway, ready for the "secret sandwich spread"? Okay...so, see that middle ingredient? The one in the blue tub? Yeah. Weird, huh? But it TOTALLY makes this spread!! 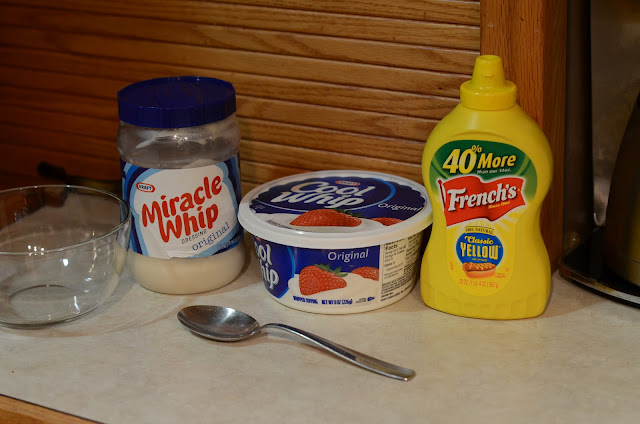 I asked my grandma, "What on earth possessed you to try THAT?!" Her answer, "I don't know!!!" Whatever the case, it is crazy good. I wish I would've given it an appropriate chance before. Also of note: add cloves and use it on ham. 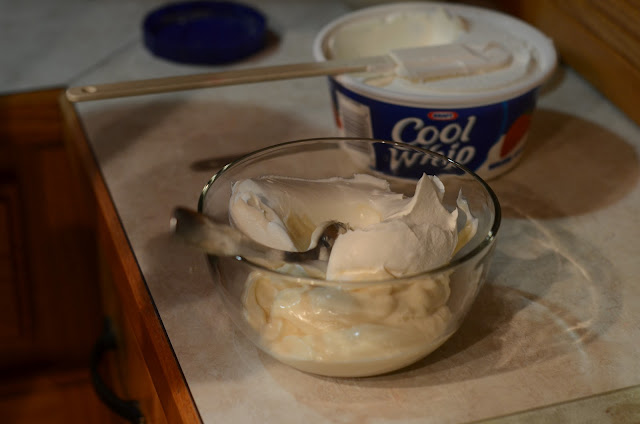 Then add in the mustard. This recipe started out as an "eyeball" recipe, but when Gram started making these for the American Legion, she needed a recipe so that it could be replicated! You can still eyeball it, if you don't need so much. It's 1 part mustard to 2 parts Cool Whip to 3 parts Miracle Whip (if I've done my math right...2T is an 1/8 of a cup which is half of a 1/2 cup which is 1/2 of a cup...right? Gah. Maybe you should just eyeball it.). ;) 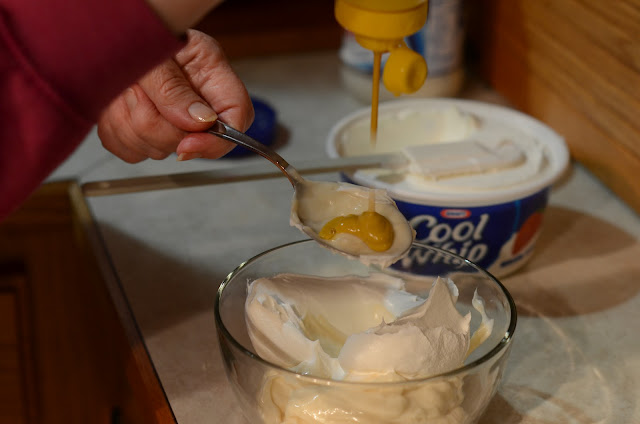 When it's done, it should be a fluffy mixture that is pale yellow...and oh my word, the deliciousness. Even if it is weird.

Spread the spread (wait, huh?) on the top bun and welcome your taste buds to heaven! 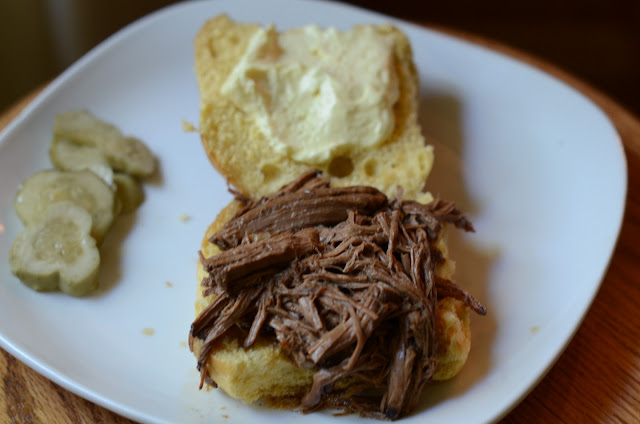 Butter crock pot (or roaster), place roast into roaster, season with salt and pepper. Mix together onion, garlic, Kitchen Bouquet, Au Jus, water, and allspice and pour over roast to "almost cover" roast. Cook in crock pot, on low, for approx 10 hours, or until done and easy to pull apart. Strain "juice" (I believe "drippings" is the proper word) discard solids, and set juice aside. If you prefer to cook in oven, cook in roaster, at 350*F for 4 hours. If you are so blessed as to have a deli slicer (or if your butcher will slice it) have them slice it as thin as possible. And give them a kiss for being so kind. Return beef to reserved juice and warm as needed before serving! Serve on buns with your preferred condiment, however I strongly recommend the sandwich spread below!

Mix together, serve on sandwiches! Add cloves (to taste) and serve with ham!