Let Me Tell Y'all About My Friday.

April 22, 2013
Sooooo, as you know, that while the rest of North America is enjoying the fruits of spring (beautiful weather, flowers, birds, FLIP FLOPS), MinneSOOOOOta appears to be stuck on December.

(Our driveway on Friday morning...) 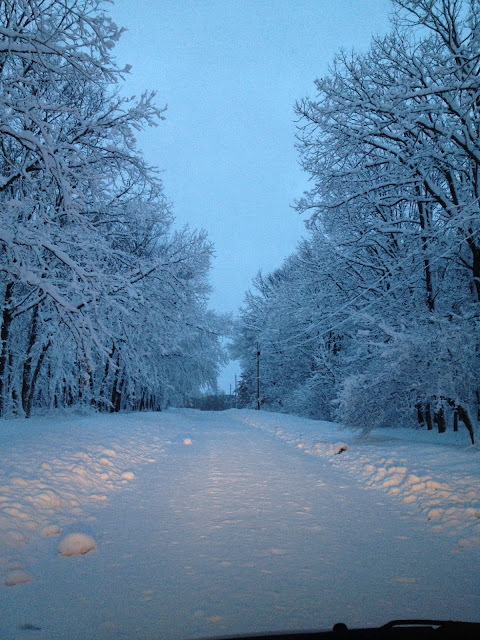 Another one of these (hideous, unfortunate, ugly, disgusting, *insert your adjective of choice here*) storms dumped a foot of snow on us last Thursday night, and I had to work Friday.

A friend and I decided to follow one another (she had to work longer than I, which is why we didn't just drive together) to work, but she needed to drop her kids off at her aunt's first and I ended up being the "leader" of our two minivan caravan. I figured we were gonna be okay when the state highway was, while slow going and snow/ice packed, plowed and driveable, but when I turned off the highway onto a county road and saw ONE set of tracks...IN THE OPPOSITE LANE and the lane I was driving in hadn't even been driven on yet, I got a leedle skeered.

I plowed (literally, read on) on, listening to the bottom of my van scrape along the top of the snow and little by little I was going slower...and slower...and slower...even though I wasn't the one slowing my van down! NO WAY MAN!! I was pushing on that gas pedal 'cuz I knew if I stopped, it was all over.

But then...my van just...STOPPED. All that snow I had been "plowing" with the bottom of my van had built up in front of my van and just plain stopped me in my tracks. Which meant my friend, who was behind me and driving in MY tracks had to stop...which meant now we were both stuck. 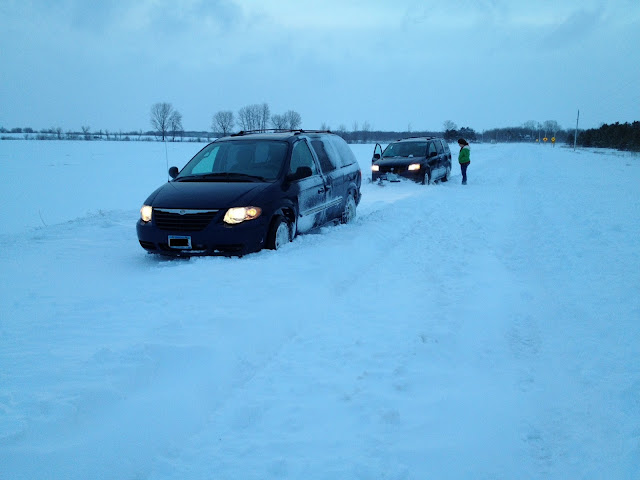 In the middle of the freaking road. (Doesn't really look that bad, does it? Apparently I just couldn't get enough traction to get through?!)

I called my hubby. She called her hubby. I called my dad (he was less than a mile from where we were.) And I called work. Funny thing was, I had called work about 5 minutes before to tell them we were going to be "just a little late" because the roads needed some very close attention paying to them...when I called the second time, I was all, "Soooo, yeah. Um...we're gonna be a lot late now."

I got out of my car to inspect how badly I was stuck and because the weather gods hadn't had enough of a laugh yet, I must've leaned on the lock of my door and I LOCKED MYSELF OUT of my running, stuck in the middle of the road van. 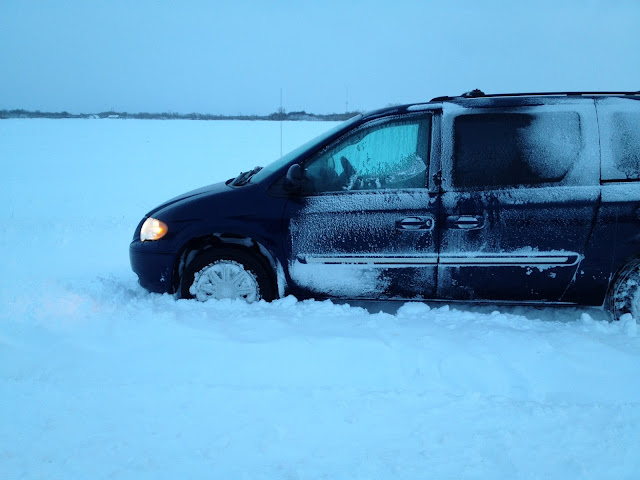 I can't make this stuff up.

Here's where it pays to have some connections...so, my friend's husband works for the county and was out plowing the roads, so he called his other plow buddy and told him we were stuck...this is important in a bit.

My dad shows up, hauls us all to my friend's aunt's house to drop her kids off. When we get back, this was waiting for us: 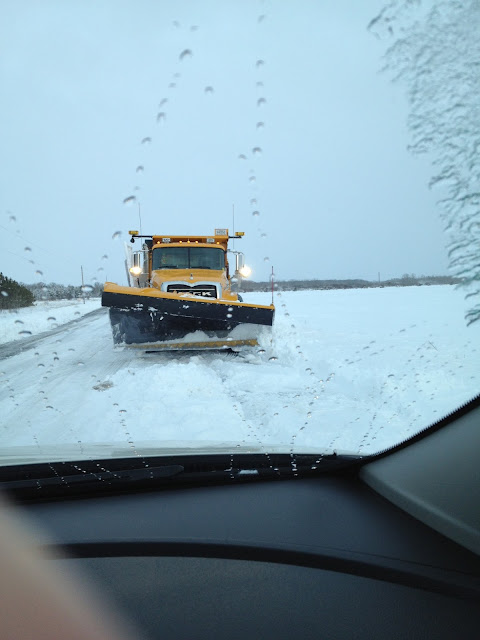 Our own personal snow plow. ;) My hubby and the snow plower had already freed my van (just needed a little tug from a big, manly truck to get out) and were working on my friend's van.

Something about that whole situation...my husband, in snow covered "coveralls", and working hard to "save me"...was pretty sexy. I guess I do have a bit of a "princess syndrome" afterall. What can I say...I like to be rescued by my hot husband. :)